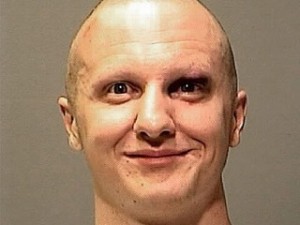 Jared Loughner, the man accused of the Tucson massacre that left six dead and injured 14 others, appeared in a packed courtroom today shackled and in khaki prison garb, appearing to smirk as he stood before the judge.

Federal officials released Loughner’s mug shot, showing him smiling into the camera despite hints of a black eye.

“Yes, I am Jared Lee Loughner,” said Loughner, with a freshly shaved head, when the Judge Lawrence Anderson asked him to confirm his identity.

Holding up a financial affidavit, Anderson asked Loughner, “I can’t read your signature. I know how hard it is to sign with handcuffs on. Did you sign this?”

Loughner, with a fresh bruise on the side of his head, leaned forward to look at the paper and responded, “”Yes I signed it. Mrs. Clarke did help me out.” Mrs. Clarke refers to his court appointed public defender, Judy Clarke.

Every federal judge in the southern district of Arizona recused themselves from the case because one of Loughran’s alleged victims was federal judge John Roll.

Clarke said that she objects to “further proceedings in Arizona” on behalf of Loughner, but did not object to her client being remanded without bail. The judge told the courtroom that Loughner was a “danger to the community” before saying, “Good to you” and adjourning the session.

About 80 reporters and 25 federal marshalls packed the courtroom, which appeared to be void of any of Loughner’s relatives.

Loughner’s next court appearance is scheduled for Jan. 24.

This is the first time Loughner has said anything since Saturday’s shooting. Investigators said that Loughner had refused to speak to them since his arrest.

If convicted of murdering either of the federal employees, Loughner could be sentenced to death or be given life in prison.

President Obama led a moment of silence at 11 a.m. today and he has ordered that the country’s flags be lowered to half staff in honor of the tragedy.

Among the injured is Rep. Gabrielle Giffords, the target of alleged gunman Jared Loughner’s shooting rampage. Giffords remains in critical condition in a medically induced coma and with part of her skull removed to ease pressure on her brain.

Loughner has invoked his right to remain silent for the last 48 hours, saying “not a word,” Pima County Sheriff Clarence Dupnik said.

Dupnik said investigators believe Loughner acted alone and is not part of a broader conspiracy.

“This individual is a very troubled individual…who is a loner,” Dupnik said. “We’re still actively pursuing any activities that he might have been involved in. I’m not aware of any ties he had to any group.”

State charges are also expected to be filed against Loughner.

During a search of Loughner’s home, authorities found an envelope with handwriting that read “I planned ahead,” and “My assassination” and the name “Giffords,” as well as Loughner’s signature.

There was also a letter from Giffords indicating the two had met before. Giffords’ spokesperson said that the congresswoman often writes thank you notes to constituents she meets at her “Congress on your Corner” events. If Giffords had met Laughner and written him a note, the office would have a record of that, staffers said.

The congresswoman was the clear focus of the gunman’s assault, Dupnik said.

“He ran through the crowd and when he got to [Giffords] he just started shooting,” the sheriff said.