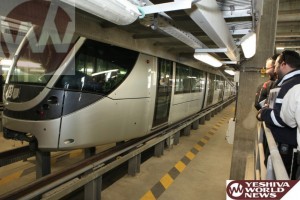 Last Friday (19 Av) at 5:30am, the first train began rolling from the Pisgat Ze’ev station, kicking off Jerusalem’s long overdue light rail train service. Many were on hand for the auspicious occasion, including area residents Chaim and Tamar Zini, a frum couple in their 60s who live in proximity to the first stop.

Chaim admits he was not overly interested in being on the first train, but his wife insisted so he could not refuse. He was shocked to hear that the first ride demands they be outside at the station at 5:30am, but he went along with it, taking seforim for the ride. When asked why he decided to study Chok L’Yisrael on the train, he explained that as long as he had to be on the first run of the new service he figured he can at least do his part to ensure this takes place on the right foot, by dedicating the time to his daily Torah study.

Moshe explains that this is the uniqueness of Israel and Jerusalem, proudly exclaiming that since the creation of the world, no one has ever ridden on a light rail in the Jewish Capital and he was among those privileged to be the first, making sure the kickoff was accompanied by limud.

Citypass, the company operating the train service, announced passengers will be permitted to ride free of charge for the first two weeks.