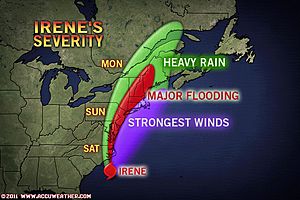 AccuWeather.com Hurricane Center meteorologists continue to forecast Hurricane Irene will strike the Outer Banks of North Carolina after bringing life-threatening conditions to much of the Bahamas.

Next, Irene will pass close to or over the Delmarva Peninsula and New Jersey, then move on to the New York City area and interior New England. The northern portion of this track is farther west and a bit slower than forecast earlier this week, and will result in more serious problems with heavy rain and damaging wind gusts farther west in New England and the northern mid-Atlantic.

Areas near and west of the center of Irene will have dangerous conditions related to flash and urban flooding. The flooding may be intensified in areas that have received torrential rainfall recently this month, such as coastal areas of the Northeast.

Areas near and east of the center of Irene will experience the strongest winds and related damage.

Sandy Hook to Cape May, N.J.

The eyewall of Irene will pass close by Sunday, with full hurricane effects expected. Weather conditions will deteriorate Saturday into Saturday night with wind and rain increasing. Periods of heavy rain (5 to 10 inches), damaging hurricane-force winds (80-100 mph) and serious coastal and back bay flooding will occur Saturday night and Sunday. Expect significant beach erosion with a storm surge averaging 2 to 4 feet, but locally it can be higher. Waves will top seawalls late Saturday night into Sunday morning.

The eyewall of Irene will pass close to the city late Sunday. There is an elevated risk of flooding rain (6 to 12 inches) and damaging winds throughout the metro area including the northern and western suburbs. Expect significant coastal flooding. Hurricane-force wind gusts (80 mph) are in store, which will lead to downed trees, as well as widespread power outages in outlying areas. Sustained hurricane-force winds are likely on Long Island and in coastal Connecticut. Coastal areas can expect an average storm surge of 2 to 4 feet, but locally higher. Waves will top seawalls Sunday.

The eyewall of Irene will pass nearby Sunday evening. There is an elevated risk of flooding rain (5 to 10 inches) and damaging winds. Hurricane-force (80 mph) wind gusts are in store that can lead to widespread downed trees and power outages. Sustained hurricane-force winds and serious storm surge flooding averaging 2 to 4 feet, and locally higher, are expected along the Connecticut coast.

The eyewall of Irene is forecast to track to the west of the city and bring potential for serious coastal flooding, damaging winds and flooding rainfall ( 4 to 8 inches) later Sunday into Sunday night. Hurricane-force (80 mph) wind gusts are forecast. Expect widespread power outages and downed trees. Conditions will be worse along the South Coast.