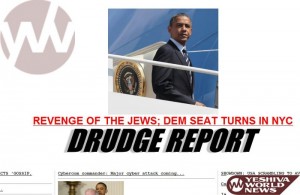 Moments after the Associated Press declared Republican Bob Turner the winner in an upset victory, Matt Drudge of the DrudgeReport, arguably the single most powerful journalist, wrote the following headline on his website in bold, red letters:

Revenge Of The Jews; Dem Seat Turns In NYC.

On top of that was a photo of President Barack Obama smirking as he walked onto Air Force 1.