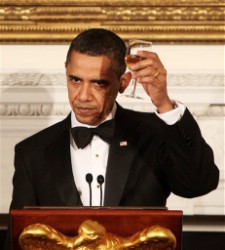 Forty Republicans sent a letter to President Obama on Thursday pushing him to ask for Attorney General Eric Holder’s resignation.

The letter, spearheaded by Rep. Joe Walsh (R-Ill.), highlights Holder’s role in the botched gun-tracking operation known as Fast and Furious, which was run under the Bureau of Alcohol, Tobacco, Firearms and Explosives (ATF).

Republicans have been investigating who authorized and had knowledge of Fast and Furious, which oversaw the sale of thousands of weapons in the Southwest region to known and suspected straw buyers for Mexican drug cartels. The majority of the weapons were never tracked, and two of the guns were found at the murder scene of Border Patrol Agent Brian Terry last December.

“We call on you today to hold Attorney General Eric Holder accountable for Operation Fast and Furious — and urge you to ask for his immediate resignation,” the letter reads.

“In intentionally letting over 2,000 firearms ‘walk’ across the border into Mexico,” it continues, “the [ATF] — under the leadership of Attorney General Holder — carried out an operation that left a U.S. Border Patrol agent dead, broke federal law and attempted to build a case for gun control. Operation Fast and Furious has proved to be one of the most serious errors in judgment carried out in recent history by a federal agency.”

After news about Fast and Furious erupted in the press, Holder requested an independent inspector general (IG) report, which is ongoing. Holder has said he will hold responsible the people involved in authorizing the operation.

The operational tactics used in Fast and Furious center around “gun walking,” which occurs when weapons are knowingly allowed into the hands of known or suspected criminals with no immediate effort to retake possession of the firearms.

Walsh began circulating the letter on Tuesday and pointed to an interview that Obama did with ABC last month in which he promised to hold officials responsible for the bad decisions that led to Fast and Furious.

“We ask you to fulfill this promise to the American people because, like you, they are upset and deserve answers,” said the GOP letter to Obama. “They also deserve accountability on behalf of their federal officials, especially those who are unelected, like Holder.”

Holder is set to testify next month before the House Judiciary Committee about his role in the operation and will face a barrage of sharp questions from Republicans.