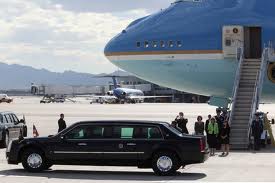 Three events will converge in New York tomorrow that will contribute to epic gridlock, making travel in and around the city impossible in spots.

The tree-lighting at Rockefeller Center, in and of itself is a cause of major gridlock.

The New York Daily News’s “Gridlock Sam” predicts that “miles of frozen streets” will “await anyone crazy enough to attempt driving into Manhattan.” The “fun,” he goes on to say “begins Wednesday morning with two performances from the Radio City Rockettes at 11 a.m. and 2 p.m. As the 2 p.m. performance ends, the crowds will start converging on Rockefeller Center for the tree lighting…. Fifth and Sixth Aves. from 48th to 51st Sts. will be closed as early as 4 p.m. and remain closed until after 11 p.m. The brunt of the diverted traffic will shift to Park, Madison and Eighth Aves. Given the extensive Bieber fan base, I’m expecting record crowds in midtown.”

Congestion will worsen during the afternoon rush hour thanks to yet another visit from the president—the number one contributing factor to gridlock in the city. Air Force One will be touching down at Kennedy Airport between 4:30 p.m. and 5:30 p.m, and the president will head by helicopter to Wall Street. From there his motorcade will travel up the FDR Drive to midtown, effecting shutting down that artery in both directions below 63rd Street.

Between 6 p.m. and 10 p.m., Obama will attend a series of fund-raisers, including one at the Sheraton at Seventh and 52nd Street and one on the upper East Side in the 60s and 70s near Fifth and Madison Avenues. All avenues east of Seventh will be frozen during this time.

The FDR will be closed to traffic again as the president motorcades back to Wall Street for the chopper to JFK and his flight back to Washington. The all-clear won’t be sounded until after 11 p.m.