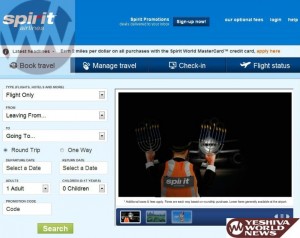 Some people laughed, while others were offended and even insulted, when they visited the Spirit Airlines website on Tuesday – just a few hours before the beginning of the Chanukah holiday.

When the site opens, a short 5 second video clip starts playing. The video shows a man directing an airplane on an airport tarmac, and is wearing a black chasidic hat, along with his curly peyos clearly visible. He is wearing a fluorescent orange vest on top of his black (what appears to be) long black coat, and white shirt-sleeves sticking out. Instead of holding the regular orange visible item to direct the airplane, this chasidic man is holding two menorah’s and waving them at the aircraft which is approaching.

Upon clicking on the video, the following text appears:

Happy Hanukkah!
Festive fares from $9* each way, based on roundtrip purchase! 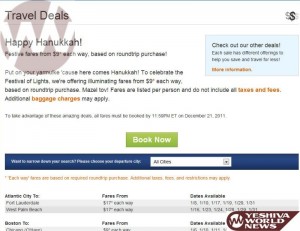 Put on your yarmulke ’cause here comes Hanukkah! To celebrate the Festival of Lights, we’re offering illuminating fares from $9* each way, based on roundtrip purchase. Mazel tov! Fares are listed per person and do not include all taxes and fees. Additional baggage charges may apply.

Is this distasteful? Or appropriate in the “holiday spirit”?

Will Spirit Airways have someone directing an aircraft holding two trees this week?

Will they have a Muslim man in traditional Muslim garb holding two Koran’s and directing traffic?

YWN is not stating any opinion, we are just simply delivering the info and allowing our readers to make their own decisions. 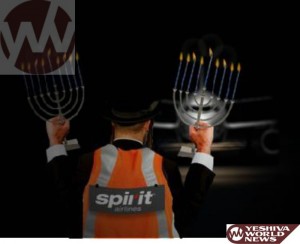 Motty Glustein: “The Whole Family Was There, The Bus Literally Bisected...