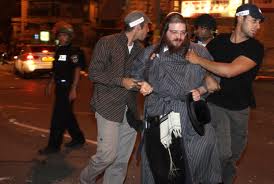 Nechemia Strassler, a veteran opponent of the chareidi community to put it mildly, has another plan, and as usual, he uses his column in the daily Haaretz to spread his venomous words.

A translation of the column appears below (without all the profanity the writer so beautifully used to hammer home his hatred):

The avreich who instilled fear in the small girl heading to school should be praised. Those who spit at and curse passersby should also be praised. Even the chareidi who labeled the female soldier (with words unfit for YWN) should be praised, along with those who wore concentration camp uniforms and yellow stars.

Perhaps, all of these examples will finally shake the silent chiloni majority of Israel. Perhaps these actions will compel the 90% of the country to understand that condemnations are futile as is putting these people on trial for one must realize these acts are just symptoms of the serious illness. One who deals with the symptoms alone wastes one’s time and contributes to spread of the disease.

The illness is called chareidi education, a method in which the chareidi young are brain-washed to the core. They are taught to believe that democratic rule is a bad thing, and an equal right for women is simply treif, as is freedom. Humanism is only for the goyim who learn mathematics, English and history, all regarded as avoda zara. To applaud those who get out into the world and earn a livelihood is an embarrassment. IDF service is a disgrace, fit only for the secular – for only he is enough a fool to sacrifice his life for the Homeland.

The chareidi youth are taught to look down upon the values of the secular state. Therefore, they don’t have any problem frightening a small child or calling policemen ‘Nazis’. Their leaders have a clearly defined goal; to provide their tzibur with quality of life on the backs of others, the chiloni. He can work hard and pay taxes and sacrifice his life in the IDF towards enabling them to evade these responsibilities and to continue embezzling the state.

What is particularly disturbing and infuriating is the fact that this process is supported and financed by the chiloni majority, the fools. They receive state budgets, as well as grants, and at times, the latter is significantly larger than a university student or career IDF soldier/officer would receive. Ditto regarding medical students or engineering students, who receive less. The chiloni tzibur is committing suicide by wiping itself out by its own hand, slowly but surely.

And now, in light of the events in Beit Shemesh, the prime minister announces his proposal for a solution. He envisions two cities, one mixed; religious and chiloni, and the other only chareidi. Eli Yishai, a Shas leader, of course is opposed. Yishai understands that such a chareidi city has no right to exist, for it would be a city without an income, without arnona property tax, without industry and business. Without the chiloni-religious supporting such a city there simply will not be funds available for the large families and there will be no funds available for their educational institutions, the healthcare, social services, shuls, yeshivot and kollelim.

Beit Shemesh is now planning a new area containing 25,000 units. The state is earmarking this new area in its entirety for the chareidi sector with attractive rates, permitting one to get the land at half price, in contradiction to the recommendations of the Trachtenberg Committee. This is in addition to other tax incentives they receive, all on the backs of the taxpayer, the chiloni and religious [referring to frum non-chareidi/ dati leumi].

Therefore, we must stop treating symptoms and we must cure the disease. That is to say we must cut all funding to the Chinuch Atzmai, Agudas Yisrael and Shas educational institutions and to compel the children to attend schools with the general curriculum. France would be an example of such a system. One who wishes may teach one’s children Mishnah and Talmud during the after school hours, after school.

In addition, all the draft evaders must be inducted into the IDF for three years like all other citizens because we are all responsible for defending our country. All budgetary support for yeshivot and kollelim must end, compelling the chareidim to get out and work. This was also the case in Poland and Morocco, where Jews never dreamt of life as parasites, living at the expense of others.

Realizing however where we are living, and the calculations of Binyamin Netanyahu, I know there isn’t a chance this will occur and the plea will fall on deaf ears. Therefore, we will continue falling into the slow but steady process of suicide.