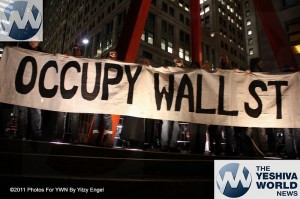 The protesters were objecting to provisions in the bill, which President Obama signed into law on Saturday, that civil liberties groups say allow the United States to detain American citizens indefinitely in military custody.

The protests at Grand Central Station, which were dubbed a “flash mob,” were the latest from the group in New York that sparked an international movement in the fall protesting Wall Street.

The protesters also went to the New York City offices of Sens. Charles Schumer (D) and Kirsten Gillibrand (D), who both voted for the bill.

The Defense Authorization Act sparked a vigorous debate in Congress before it was passed in December, with disagreement over whether the bill actually would allow for the detention of American citizens. Civil liberties groups and many Democrats claimed the legislation would, while the bill’s supporters argued that the authority already existed.

Three protesters were arrested at the Grand Central Station protests, according to the Times.