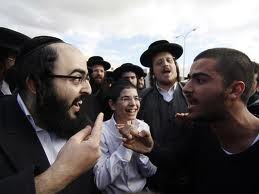 Once upon a time morality and what we are willing to expose our children to was not exclusive to the frum community, but in modern day Israel it appears a portion of the secular community has lost sight of acceptable and unacceptable behavior.

The latest round of dispute between the frum and secular activists brings us to Jerusalem’s Kiryat Yovel neighborhood, where frum residents have already endured more than their fair share of abuse, including verbal and physical assaults, downing the eruv and dragging residents into court for using a home for a Shabbos minyan.

For some, the fear of an area becoming chareidi is justification to launch an all-out war, no matter how tasteless such a battle can be. In this last provocation by secularists, posters displaying nude females were posted around the community, on Shabbos, realizing the frum residents will not be able to tear them down. The caption on the posters of an Italian painting was “HaAdarat Nashim”, the slogan of the secularists nationwide in the battle against segregated buses and other ‘discrimination’ against women by the chareidi sector.

Officials who stand at the helm of the battle against the growing chareidi presence in that neighborhood insist this was not their initiative, but they also did not condemn the move, which seems to have elicited a smile from the secular camp.

Needless to say the presence of the posters on Shabbos led to much pain and anguish among the frum families, begging the question why the non religious did not find this tasteless and objectionable as well.

Ynet quotes one frum community resident explaining “it is clear as day that this was not in any way an artistic effort, but simply an assault against the religious community. I myself am chareidi, and my husband wears a kippa sruga. We are not taking over anyone’s neighborhood. We live alongside our neighbors in harmony, including the non frum neighbors. We are open minded and liberal and have internet in our home, but this last action is undoubtedly an anti-chareidi incident”.

According to Ronit Gilboa, who heads the neighborhood battle against the chareidim, she too saw the posters but does not know where they came from, denying any connection.

She did add however that from her perspective, there was a positive side to the posters, referring to them as “a positive décor to the community, an artistic work by Gauguin and Botitzli which is preferable to the pashkavilim of the chareidim. Perhaps this is an  act of provocation by chilonim but that is exactly what the chareidim in the community do daily, hour by hour, trying to take over, shouting Shabbes Shabbes and Prutza, turning homes into shuls that operate clandestinely thrice daily and batei medrash for the masses that create a disturbance from 5:00am to midnight. The chareidim have yet to get it. Kiryat Yovel will not capitulate”.