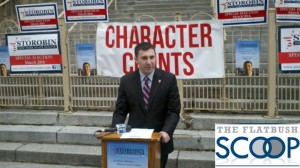 From the start of his campaign for State Senate, Lew Fidler has engaged in nasty, vicious and false negative attacks against me. Realizing that he stands against traditional marriage, against vouchers, in favor of abortions, in favor of higher taxes and otherwise out of step with the people of the district, Mr. Fidler knew that he cannot appeal to the voters by discussing issues. As such, his campaign and its supporters resorted to character assassination.

They said that I was tied to the Nazis. They questioned whether I’m really Jewish. They’ve attacked my profession as an attorney with a false smear. They’ve even repeatedly attacked my mother with words I won’t write here.

My maternal grandfather Pinchus knew how to be a shohet, but the only thing we knew is that he would buy and prepare the chicken during important events like weddings and funerals, without telling us why. While I was told of my grandparents’ brothers who got killed as WWII soldiers, I was never told about all the other relatives who perished in the Shoah until we came to the United States.

In the Soviet Union, one could not give his children Jewish names, so if you wanted to name your child after someone named Abraham, you called him Arkady. Sarah became Svetlana. David – my name, and the name of my paternal grandfather after whom I was named – became Dmitry.

This too became an attack against me from the Fidler supporters. They claimed that I renamed myself for this election, an attack that is blatantly false. I legally changed my name when I got my citizenship many years ago, and I have been known as David since my first day in the United States. In fact, even when I got my bris as a baby in 1979, my grandfather Pinchus said a prayer and used the named David for me.

In the Soviet Union, we did what we could. My dad, inspired by Israel’s victory in the Six-Day war, got a bris in 1967 as a 23 year old. After their City Hall wedding, my parents quietly went under a self-made chuppah in the backyard out of sight of others where the only thing they knew how to do is to step on the glass cup. While knowledge of Judaism was impossible to acquire, and could potential subject one to arrest, we would do what we could, though usually without any knowledge of how to do it properly.

In 1991, we were blessed to come to the United States. While we had the right to practice our religion, we did not have the knowledge to know where to begin. Even as we struggled to survive on my mom’s $5 an hour salary working double-shift, we tried to learn. Every Shabbos my mom would light candles. I learned to read Hebrew, and I learned what to say before eating bread or drinking wine. We learned when to fast and when to drink four glasses of wine.

Some things we learned from the right sources. Other times, we’d pick up anything that’s available as a source of information: newspaper articles, TV shows, you name it. As a result, some of the information we got was accurate, but other was not necessarily so. For instance, many years ago, I got an incorrect version of the story of Pesach on the Discovery Channels.

A few years ago, I was lucky enough to find my way into the Gateways program. I finally could learn from the right people. It was no longer learning a bit here and an a bit there. I could finally learn and understand things in an organized fashion, getting information from the right sources. I got to know rabbinical scholars to whom I could to turn to for accurate lessons instead of grabbing knowledge wherever I could find it, such as the Discover Channel, which I learned from my experience at Gateways is wrong and inaccurate.

I still have a lot more to learn and to observe more every day than I observed the day before. I’ve always been honest about this with everyone: the rabbonim, the politicians like Assemblyman Dov Hikind and Councilman David Greenfield, the regular people I would meet while campaigning. The Communists spent 70 years wiping out Yiddishkeit in Russia, and even though the Soviet Union is gone, its legacy is in many ways continuing. My family and I, just like the millions of other Soviet-born Jews, try to learn and grow.

What happened to Soviet Jews is a tragedy and it should never be used by the Fidler campaign or his supporters to try to score political points.