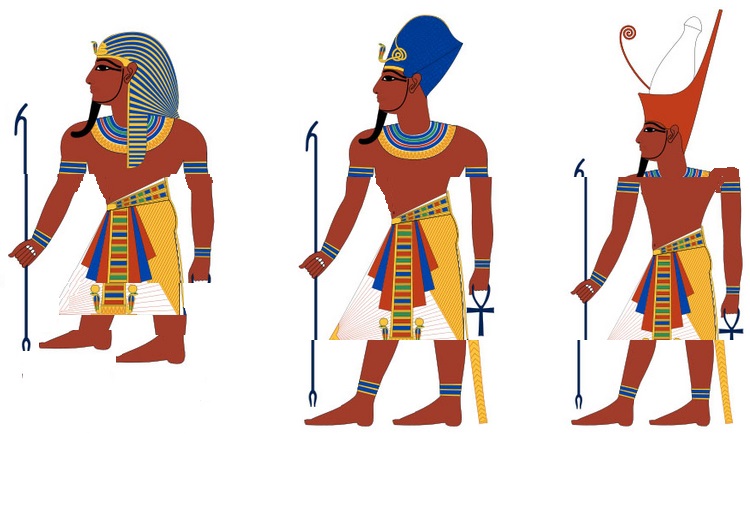 THE OBLIGATION OF VIEWING OURSELVES

The Gemorah in Psachim (116b) informs us that, in each generation, we are obligated to view ourselves as if we actually left Mitzrayim. Indeed, in Michtav MeEliyahu, Rav Dessler writes that since time does not progress linearly, but rather travels in a carousel like circle, the 15th of Nissan of the year 2448 is actually the very same 15th of Nissan of our own year now. This is one of our obligations on the night of Pesach. This being the case, that halachically we must view ourselves as actually leaving Mitzrayim, in our mind’s eye we should envision and picture the escape.

Let’s give it a try. Before us, standing at the water’s edge about to enter it, stands Nachshon Ben Aminadav. Behind us, on a chariot, Pharoah is leading his hordes of well-trained soldiers. They are rapidly catching up. Yes, it is Pharoah – the short, obnoxious leader of the Egyptians that dared to present himself as a god.
But who exactly was he? What was his name? What do we know about him?

In the 77th chapter of a work called Sefer HaYashar, which was first printed in Venice in 1525, there are details as to what his name was, and more about who he may have been. [Alter Bergmann published a more recent edition of it in Tel Aviv]. The author of this Sefer HaYashar is anonymous, and there seems to be a debate as to whether it was written in the times of the Tannaim or is a much later compilation.

So, what do we know about Pharoah according to the Sefer HaYashar? Well, apparently he took the throne at the age of twenty. His father, Melol, was sick for the last ten years of his life, but had reigned for 94 years. His name was Adikam Ahuz. In Egyptian, according to the Sefer HaYashar, Ahuz means short, and short he was. He was an Ammah and one half, exceedingly ugly, and had a beard down to his feet. [One perhaps could best picture him as one of the seven dwarfs a la Snow White, but with a crown instead of a nightcap]. The Sefer HaYashar states that his reign started in the 206th year of Israel’s going down to Mitzrayim, so he reigned for four years.

It seems, by the way, from the Sefer HaYashar, that only his advisors and confidants appended the pejorative Ahuz apelation to his name [the modern equivalent of shorty]. His subjects called him Adikam.

Is the Sefer HaYashar reliable? Good question. Looking through the work, we do find some interesting tidbits of information that do not seem to have other parallels in our extant Midrashic ouevre. For example, Tzipporah, Moshe Rabbeinu’s wife is described as being on par with the Imahos, Sara, Rivkah, Rochel and Leah. Rabbi Aryeh Kaplan z”l does use the work in his Chumash, and there are many parallels in other Midrashim and Gemorahs. Let’s assume that it is reliable.

Let’s now ask another question. Secular historians have all the Pharoahs named. What is the secular name of Pharoah? It is possible to accept the secular name and the surrounding history as accurate without necessarily having to accept the secular chronology as accurate. If we follow the standard dating, of when the old Pharoah (Basya’s father) died and a new Pharoah arose (See Shmos 2:23) which occurred in 2444, this gives us the figure of 1316 BCE. The Pharoah at that time was called Horemheb, according to secular historians.
The name of one of the cities that Klal Yisroel built was Ramses (See Shmos 1:11). It might be tempting to accept Ramses II as the Pharoah. But his secular dating is much later 1134 BCE. Nonetheless, the thesis presented earlier might be acceptable – that there was some sort of a mix-up in their dating, somehow.
If we follow the 166 year discrepancy (or 163 years according to Rabbi Aryeh Kaplan) then the Pharoah is Thutmose III, who, according to the secular calculation, reigned from 1490-1436 BCE.

There is another possibility (which was also mentioned in a Jewish Action a number of years ago.) It seems that there was a Pharoah known as Phiops II or Pepi, who is mentioned by Manetho, an Egyptian priest from Heliopolis. Manetho compiled an Egyptian history under the patronage of Ptolemy I, entitled Aegyptika. It was written in Greek and finished c.271 BCE. It is now only extant in translation and is available to us in Josephus. According to Manetho, Pepi ruled from age six to age one hundred. Manetho’s datings have been questioned by historians who claim that there was political gain for the Egyptian priest in extending the lengths. However, the account has been verified through an Egyptian papyrus discovered in 1822 and called the Turin Royal Canon. (See Alan Gardiner, Royal Canon of Turin. Griffith Institute, 1959) [Parenthetically, The Turin papyrus dates to Ramses II and mentions the names of all Egyptian rulers preceded by the register of the “gods” who ruled over Egypt before the Pharaonic era. It was discovered in Thebes by an Italian traveler named Bernardino Drovetti. Eventually it was donated to the Museo Egizio by the king of Sardinia.]

There is another advantage to this approach, since the Ipuwer papyrus is now remarkably on mark. The Dialogue of Ipuwer is an ancient Egyptian poem preserved in a single papyrus, Leiden Papyrus I 344. It is now housed in the National Archeological Museum in Leiden, Netherlands. In general there is a debate as to whether Ipuwer was just being figurative or descriptive. For more information see Stephen Quirke, Egyptian Literature 1800BC: Questions and Readings (London 2004). But the parallels to Yetzias Mitzrayim, as seen below, are remarkable.

2:5-6 Plague is throughout the land. Blood is everywhere. 2:10 The river is blood. 2:10 Men shrink from tasting – human beings, and thirst after water 3:10-13 That is our water! That is our happiness! What shall we do in respect thereof? All is ruin. 7:20 …all the waters of the river were turned to blood. 7:21 …there was blood thoughout all the land of Egypt …and the river stank. 7:24 And all the Egyptians dug around the river for water to drink; for they could not drink of the water of the river. 2:10 Forsooth, gates, columns and walls are consumed by fire. 10:3-6 Lower Egypt weeps… The entire palace is without its revenues. To it belong [by right] wheat and barley, geese and fish 6:3 Forsooth, grain has perished on every side. 5:12 Forsooth, that has perished which was yesterday seen. The land is left over to its weariness like the cutting of flax.

3:2 Gold and lapis lazuli, silver and malachite, carnelian and bronze… are fastened on the neck of female slaves. 4:3 (5:6) Forsooth, the children of princes are dashed against the walls. 6:12 Forsooth, the children of princes are cast out in the streets. 2:13 He who places his brother in the ground is everywhere. 3:14 It is groaning throughout the land, mingled with lamentations.
There is also one more tidbit. According to the Seforno, the term “Tzefardaya” means crocodiles—not frogs. The Ipuwer papyrus mentions crocodiles coming out of the Nile left and right on a path of destruction.

The halacha of envisioning us being there is not just theoretical. It involves physical action as well. The Rambam writes (Hilchos Chometz UhMatzah 7:6) based upon the verse in Dvarim 5, “And you shall remember that you were a slave in Mitzrayim” as follows: “In other words, as if you yourself were a slave and you left to freedom and you were redeemed.” The juxtaposition of this Rambam with the next halacha gives us remarkable insight.

The Rambam writes, “Therefore when a person eats and drinks on this night he must lean in the manner of free men.” In other words, it seems that the obligation of leaning is a manifestation of this biblical obligation of imagining and visioning that it was actually us. So this Pesach let us go through the extra effort of picturing it with even more detail. A short, unattractive Pharoah named Adikam Ahuz chasing us in a chariot.