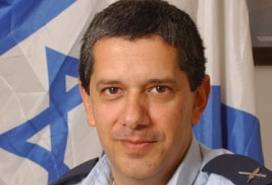 Israel Air Force Command Major-General Amir Eshel has turned down his new vehicle because he does not wish to be driven in a German-manufactured car. Eshel’s family members were kedoshim in the Holocaust HY”D.

It was Eshel who arranged for the first IAF fly-over in Poland, when they flew over the Auschwitz-Birkenau death camp.

Officers of his rank are entitled to new vehicles and when he was approached to arrange for his new Volkswagen Passat he declined immediately.

As commander of the air force’s Tel Nof Base in 2003, Eshel led a squadron of F-15 fighter planes over the death camp. At the time he said over the radio “It appears that not only did the Germans work for the mass destruction of the Jews, but they tried to eliminate any trace of the victims and the atrocities. By reading the names, thereby perpetuating their memories, we wish to redeem the victims of that destruction and try to restore their faces and human images”.