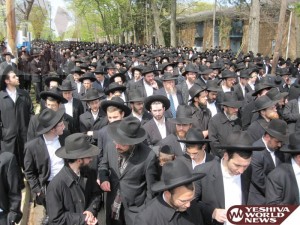 After decades of decline, the Jewish population of New York City is growing again, increasing to nearly 1.1 million, fueled by the “explosive” growth of the Hasidic and other Orthodox communities, a new study has found. It is a trend that is challenging long-held notions about the group’s cultural identity and revealing widening gaps on politics, education, wealth and religious observance.

Along Eastern Parkway in Brooklyn. In 2002, 33 percent of respondents identified themselves as Orthodox Jewish; in 2011, 40 percent did.

Those findings, contained in the first authoritative study of the city’s Jewish population in nearly a decade, challenges the entrenched image of Jews as liberal, affluent and well educated. Over the last decade wealthy, Ivy League graduates like those on the Upper West Side have increasingly lost population share relative to Orthodox groups, like the Hasidic population in Brooklyn, where college degrees are rare and poverty rates have reached 43 percent.

Members of these Orthodox groups also have been known to be far more likely to adopt more conservative positions on matters like abortion, same-sex marriage and the Israeli approach to the Palestinians.

At the same time, among non-Orthodox Jews, there has been a weakening in observance of quintessential Jewish practices. Participation in Passover Seders has declined: 14 percent of households never attend one, almost twice as many as a decade ago. Reform and Conservative movements each lost about 40,000 members between 2002 and 2011; nearly a third of the respondents who identified themselves as Jews said they did not ally themselves with a denomination or claimed no religion.

“There are more deeply engaged Jews and there are more unengaged Jews,” said Jacob B. Ukeles, a social policy analyst and one of the principal authors of the study, which was sponsored by UJA-Federation of New York. “These two wings are growing at the expense of the middle. That’s the reality of our community.”