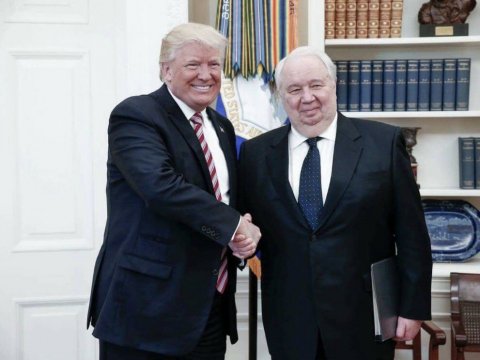 Sergey Kislyak, the Russian ambassador to the U.S. whose meetings with Trump associates have attracted intense scrutiny and apparently forced at least one cabinet member from his job, is reportedly being recalled to Moscow.

Kislyak had been expected to depart the nation’s capital, but news outlets had previously reported that he was bound for a new post at the United Nations in New York City. On Sunday Buzzfeed News reported that Kislyak was instead recalled home.

His expected departure comes amid multiple investigations, including by the FBI, into Russia’s meddling in the 2016 election and the Kremlin’s potential ties to the Trump team. The ambassador, himself, has been dubbed “the most radioactive man in Washington,” in the wake of his meetings with President Donald Trump and members of the president’s team.

The FBI and congressional committees have focused particular attention on a December meeting involving Kislyak, Flynn and Kushner.

After that meeting and others came to light, Flynn stepped down from his post as national security adviser, and Sessions recused himself from involvement in the FBI’s investigation into Russian election interference.