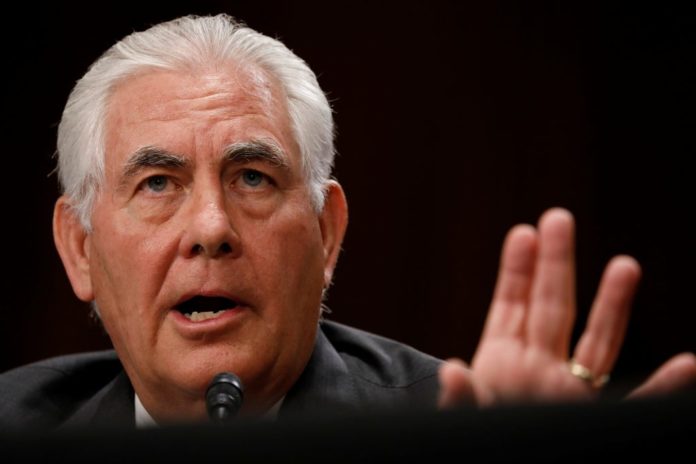 U.S. Secretary of State Rex Tillerson on Monday acknowledged severe strains in U.S.-Turkey relations, although he said he is hopeful of mending ties with the NATO ally and partner in the anti-Islamic State coalition. He also said he hoped that the U.S. and Turkey could replicate an agreement reached last week between the U.S., Russia and Jordan for a ceasefire in southwestern Syria in the north of the country.

Speaking to Turkey-based American diplomats in Istanbul, Tillerson said he believed the two countries are beginning to restore mutual trust that had been lost over the course of the last several years. He said since becoming secretary of state, he had met three times with Turkish President Recep Tayyip Erdogan — including a lengthy session on Sunday night — and that each time the tone of the conversation had improved. While challenges remain, Tillerson said he believed the first steps to re-establishing relations “on the proper basis” have been taken.

“I think our relationship here in Turkey which has been under some stress for some time, I hope we are beginning to put it on the mend,” he said. “I think we’re beginning to rebuild some of that trust that we lost in one another, they lost our trust to a certain extent, we lost theirs, so I think we are working very hard to rebuild that level of trust and that is the basis for any relationship.”

“This is an extraordinarily important relationship to the United States for many, many reasons that you would well understand from a security standpoint to the future economic opportunities as well and the important geography just by luck of Mother Nature that the citizens of Turkey occupy at this crossroads of the world,” Tillerson said. “So it’s important for so many reasons which is why we must put the relationship on the mend, re-establish it on the proper basis and strengthen it going forward and I think we’re taking the first steps in that regard.”

Tensions between Washington and Ankara have been high over U.S. support for Kurdish rebels in Syria, Turkey’s crackdown on dissent, particularly since last year’s failed coup, and Turkish allegations the U.S. was sympathetic to the coup-plotters — accusations that American officials have vehemently denied.

Turkey believes the Kurds want to establish an independent Kurdish state that would threaten its sovereignty and has vocally protested their arming by the United States in their fight against Syrian President Bashar Assad. In the meantime, the U.S. has been critical of what it sees as Erdogan backsliding on democratic principles, including human rights, in the wake of the coup attempt.

On the potential for a ceasefire in northern Syria, Tillerson noted the arrangement that was announced on Friday at the G-20 summit in Germany.

“We’re making some progress down in Syria, we’re hopeful that we can replicate that with Turkey on some areas in the north part of Syria,” he said. “So we’re going to be working hard on all those issues and I think, I hope that will also form a basis for improving the trust as well.”

U.S. officials were cautious about Tillerson’s optimism, noting Ankara’s hardline antipathy for the Kurdish groups that Washington sees as key to destroying the Islamic State group. The officials, who spoke on condition of anonymity because they were not authorized to speak publicly about the sensitive matters, said talks with the Turks were in their very early stages.