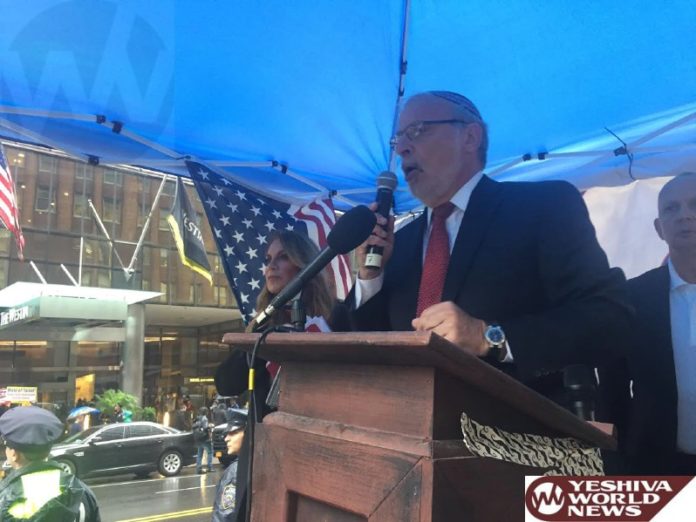 NY State Assemblyman Dov Hikind (D-Brooklyn) says there’s something fishy about Linda Sarsour’s “Jewish Cemetery Advocate.” Sarsour gained headlines after boasting about raising big bucks for Jewish cemeteries, but when one of those cemeteries said they’d never seen a dime, Sarsour trotted out Jennifer Goodland. “Read this from Jennifer Goodland of Golden Hill Cemetery in Colorado…” Sarsour tweeted and posted on her Facebook as proof of her integrity.

Christopher Mathias of the Huffington Post also tweeted Goodland’s letter and glibly asked, “Hi @HikindDov, any comment on this?”

The letter from Goodland attacked the Algemeiner Journal, which had first claimed that Sarsour’s fundraiser on behalf of Jewish cemeteries was less than honest.

Just one small issue: Goodland is NOT an employee of Golden Hill Cemetery in Colorado.

On July 12, two of Hikind’s staff members spoke with Neal Price, executive director of Golden Hill. Price told both Yehudah Meth, Director of Communications, and Inna Vernikov, Esq. (Special Assistant to Hikind) that Goodland is not now and has never been an employee of the cemetery nor a spokesperson for Golden Hill. Price said he had only spoken with Goodland once when she called to “offer help.” He said he never heard of Goodland before then and that she was not officially involved with his cemetery in any official capacity, nor is she a cemetery spokesperson.

Vernikov challenged Goodland on Facebook. On July 15, at 9:21pm, she wrote to Goodland, “I spoke to Neal Price myself. He barely knew who you were and didn’t understand where you came from…Neal did have serious questions about your involvement and about receiving the money. Bottom line is I care that the money goes to the cemetery. Is that happening?”

Goodland replied, “Ask Neal. I never see any of it because this (was) my mitzvah.” She went on to admit, “I am neither with Celebrate Mercy nor with the Golden Hill checking account and thus perhaps you should go call your best bud Neal, ask him because he knows, and you two can have a little congratulatory session about acting this way toward a woman who was doing all of this as an act of CHARITY…I’m not your punching bag any more or Neal’s. You guys figure out who’s lying because now it’s all the cemetery has. Congrats.”

“Not surprisingly, Sarsour’s pseudo Jewish Cemetery advocate sounds like quite a character,” said Hikind. “And Ms. Sarsour just might possibly be a liar who got caught. As I’ve said before, Sarsour is a fraud in every other capacity. One minute, she claims to be an advocate of non-violence, the next she’s glorifying terrorists. Is anyone really surprised by this latest episode? I’m sure now that she’s been exposed, Sarsour will make certain that dead Jews somewhere benefit from the missing money. After all, she’s never had an issue with dead Jews.”