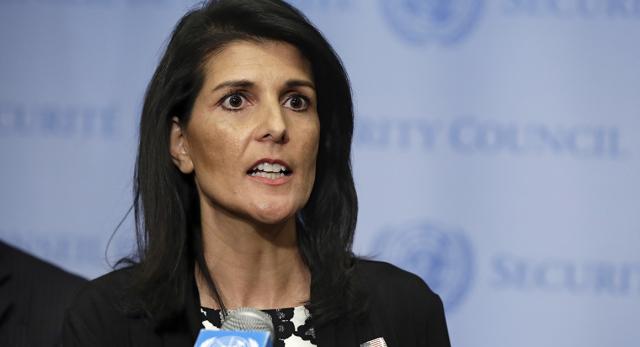 The United States is determined to ensure the International Atomic Energy Agency has the resources it needs for “robust verification of nuclear-related activities in Iran,” the U.S. ambassador to the United Nations said Wednesday.

Ambassador Nikki Haley said in a statement after meeting in Vienna, Austria with the U.N. nuclear agency’s director that she also discussed American concerns about “ensuring Iran strictly adheres to its obligations.”

The IAEA is charged with verifying compliance with the 2015 nuclear agreement between Iran and six major powers, including the United States. The pact outlined what Tehran had to do to pull back its nuclear program from the brink of weapons-making capacity in return for the West ending many of the financial, trade and oil sanctions that had battered Iran’s economy.

U.S. President Donald Trump has repeatedly criticized the deal, but has yet to pull out of it.

Before the meeting, Iran’s Foreign Minister Mohammad Javad Zarif said in a letter to Amano and European Union foreign policy chief Federica Mogherini that Haley’s visit was another step by the .S. “that flies in the face” of the nuclear agreement.

While U.S. officials are free to travel and meet IAEA officials, Zarif said the publicly stated purpose of Haley’s visit to discuss U.S. concerns “raises several serious concerns over further violations of the letter and spirit” of the nuclear deal and the U.N. Security Council resolution endorsing it.

“Regrettably, this visit, with the stated purpose to ‘press the agency,’ is widely perceived by the international community as a manifest and blatant attempt…to put pressure on the agency and adversely affect the professional and impartial nature of the work of the IAEA in carrying out the job entrusted to it,” he said.

The foreign minister complained that the way the U.S. planned and publicized Haley’s visit created “further uncertainty and ambiguity” among other countries and the private sector over the sustainability of the nuclear agreement. He said this was another example of U.S. “mala fide” — or “bad faith” — aimed at “limiting Iran’s benefits from the deal.”

Zarif said in the letter, dated Saturday and obtained by The Associated Press, that Haley’s visit could also “undermine the credibility” of the IAEA, which is vital to global nuclear nonproliferation and is charged by the U.N. Security Council to play an “independent role” in verifying compliance with the Iran nuclear deal.

Haley’s statement after meeting Amano praised the IAEA’s “credibility, professionalism and seriousness” in conducting its monitoring and verification work in Iran, but noted that the agency’s reports can only be as good as the access Iran grants.

Zarif said he was confident that Amano “will deal with this visit and other similar attempts with absolute professionalism and integrity.”