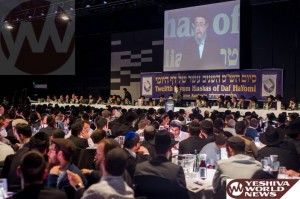 A crowd of well over 1000 people, from all communities across Jewish Melbourne, joined in Achdus to celebrate with some 200 Lomdei Daf Yomi as they finished Shas. The guest speaker at the Siyum was HaRav Fishel Schachter Shlita of NY who flew to Australia before Shabbos – and has spoken over a dozen times in Melbourne during his short visit.

Two local Baalei Batim who finished Shas for the first time inspired the audience with words from their hearts, how learning the Daf has changed their entire lifestyle, to one revolving around Torah.

As an eye-witness tells YWN, “the atmosphere was electrifying. The speeches riveting. The dancing after the siyum rejuvenating.”