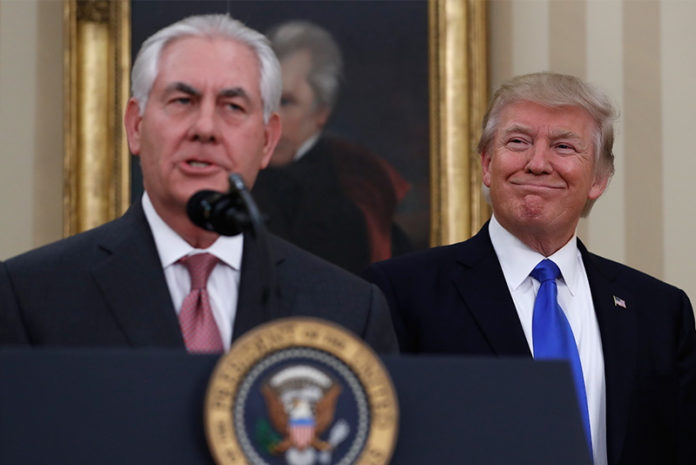 Secretary of State Rex Tillerson declared Wednesday that he never considered abandoning his job as President Donald Trump’s top diplomat, disputing what he called “erroneous” reports that he was on the verge of resigning earlier this year.

Tillerson, however, didn’t deny a story that he had called the president a “moron” after a contentious July 20 meeting at the Pentagon.

“We don’t deal with that kind of petty nonsense,” Tillerson said. “I’m just not going to be part of this effort to divide this administration.”

The press-shy, former Exxon Mobil CEO addressed reporters at the State Department and fielded questions after an NBC News report appeared to throw his future into doubt.

The story said Tillerson had been on the verge of resigning this summer amid mounting policy disputes with the White House. It said the tensions came to a head around the time Trump gave a politicized speech in July to the Boy Scouts of America, an organization Tillerson once led.

Citing three anonymous officials familiar with the incident, NBC also said Tillerson referred to Trump as a “moron” after a July 20 meeting at the Pentagon with members of Trump’s national security team and Cabinet officials.

Minutes before Tillerson spoke, Trump seemed to give Tillerson his backing.

“NBC news is #FakeNews and more dishonest than even CNN. They are a disgrace to good reporting. No wonder their news ratings are way down!” Trump tweeted.

Shortly after Tillerson’s remarks, Trump tweeted from Air Force One on his way to Las Vegas, where 59 people died earlier this week in the biggest mass shooting in modern American history.

“The @NBCNews story has just been totally refuted by Sec. Tillerson and @VP Pence. It is #FakeNews. They should issue an apology to AMERICA!” It wasn’t clear what Trump was referring to regarding Vice President Mike Pence.

NBC News said it stood by its reporting.

Appearing somber, Tillerson delivered his remarks before a lectern in the Treaty Room at the State Department — a small antechamber where the walls are hung with oil paintings of past secretaries of state. He characteristically betrayed little emotion, though sounded indignant as he responded to questions about whether he had ever called the president a “moron.”

Instead, he sought to frame his response by praising Trump’s foreign policy and emphasizing that he has been a good team player. He pointedly noted successes by Nikki Haley, Trump’s U.N. ambassador, with whom he has been privately clashing for several months.

“President Trump’s foreign policy goals break the mold of what people traditionally think of what is achievable,” Tillerson said.

His clear objective was to “dispel with this notion that I have ever considered leaving.”

“There has never been consideration in my mind to leave,” he added.

Tillerson also rejected NBC News’ assertion that Pence had to persuade him this summer to stay in Trump’s Cabinet.

A person familiar with that conversation also disputed that Pence sought to coax Tillerson into not quitting. The talks focused on easing tensions between Tillerson and the White House and finding a way for the oil man to operate better within the Cabinet, said the individual who wasn’t authorized to speak publicly on the private discussion and demanded anonymity.

NBC news is #FakeNews and more dishonest than even CNN. They are a disgrace to good reporting. No wonder their news ratings are way down!

The @NBCNews story has just been totally refuted by Sec. Tillerson and @VP Pence. It is #FakeNews. They should issue an apology to AMERICA!

Wow, so many Fake News stories today. No matter what I do or say, they will not write or speak truth. The Fake News Media is out of control!