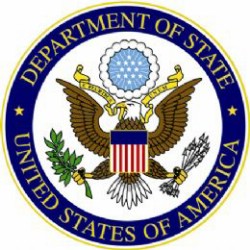 U.S. Secretary of State Hillary Clinton is resting at home in New York after being treated for a blood clot and plans to return to her office next week, the U.S. State Department said on Thursday.

Clinton, 65, has suffered a series of ailments over the last month including a stomach virus, a concussion and a blood clot in a vein behind her right ear. She was released from New York Presbyterian Hospital on Wednesday after a stay of several days during which she was given blood thinners to treat the clot.

Her doctors have said they expect her to make a full recovery.

“She’s resting at home,” State Department spokeswoman Victoria Nuland told reporters at her daily briefing. “She’s looking forward to getting back to the office. She is very much planning to do so next week.”

The State Department has said that Clinton is keeping up with her work by talking to her staff and receiving memos.

Nuland said Clinton on Thursday called into a meeting of the Foreign Policy Advisory Board, an outside group that gives her advice. The group received a briefing on Syria and also discussed energy, climate change and other issues.

Clinton has long said she would only serve one term as secretary of state and she is expected to step down in the next few weeks. President Barack Obama has chosen Senator John Kerry, chairman of the Senate Foreign Relations Committee, to succeed her.