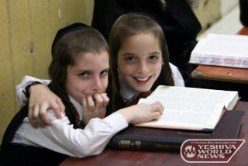 Mayor Michael Bloomberg and Borough President Marty Markowitz waffled Wednesday over who has responsibility for overseeing the failure of some Brooklyn religious Jewish schools to teach their students basic English, math and science.

As DNAinfo.com New York has been reporting this week, many Orthodox Jewish schools in Brooklyn — attended by more than 80,000 kids — offer limited instruction in non-religious subjects, or don’t teach them at all, even though they’re required to by law.

Asked during an unrelated press conference whether his administration was aware of the issue and planned to do anything to address it, Bloomberg seemed unsure about the city’s oversight role.

“I don’t think our Department of Education has anything to do with it,” he said.

“My guess would be it would be up to the state Department of Education. But we’ll be happy to check and see if they’re the ones that have the standards and have to enforce the standards for all the schools.”

According to a state DOE spokeswoman, it’s up to the board of education in each of the state’s school districts to make sure children attending non-public schools and being home-schooled are “receiving instruction which is substantially equivalent to that provided in the public schools.”

The state requires all children to be instructed in English, math, science and physical education.