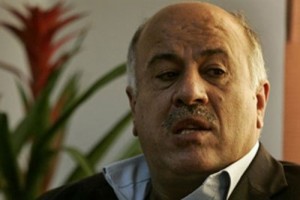 Senior PA (Palestinian Authority) official Jibril Rajoub is optimistic, realizing Yair Lapid and his party Yesh Atid with 19 seats is likely to become a major influence in the new administration. Labeling Lapid “a reasonable person,” Rajoub has a rekindled hope and possibility anticipation for renewed talks between Israel and the PA.

Speaking to Walla News in his Ramallah office, Rajoub explains that after seeing the results of the elections in Israel he is optimistic. Rajoub served as chief of the Preventative Security Force back in the days of Yasser Arafat YS”VZ as well as serving 17 years in an Israeli prison for throwing a hand grenade at IDF soldiers. He explains that he “lived the occupation as the IDF fired shells at his home” referring to an event in May 2001 as well as Operation Defensive Shield, the major counter-terrorism offensive. Nevertheless, he explains he is not pessimistic. “I was born an optimist” he says, stating the two-state solution is the road to regional peace which can be accomplished by a resumption of talks.

“It’s up to you folks. It is your move. Do you miss the intifada or the bloodshed day after day? For us, we have nothing to lose.”

Today a seasoned politician, he insists “I have no personal agenda”, speaking simply for the good of his people and peace for both Israel and the PA. “Don’t you get it? The problem is the occupation. There is a consensus and you must pull back to the pre-1967 borders”.

When asked if he has ever spoken with Lapid, Rajoub says he has not but he is well acquainted with Yesh Atid MK Yaakov Peri, a former senior ISA (Israel Security Agency – Shin Bet) official as well as journalist Ofir Shelach.

He denies that Abu Mazen compromised on the “Palestinian right of return” which he feels no one has the right to compromise on, but insists there must be dialogue towards reaching an agreement.