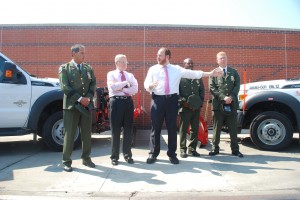 In advance of the major snowstorm now making landfall in New York City, Councilman David G. Greenfield has been in close communication with the supervisor of the local Sanitation Department depot serving Boro Park and Midwood to make sure that crews are prepared to handle the storm and have all the necessary resources. Councilman Greenfield stopped by the Brooklyn 12 Sanitation Garage in Boro Park this morning to see firsthand the preparation for this storm. He also discussed the plan to keep neighborhood streets clear and safe as the storm moves through the region later today and tomorrow morning with the superintendent.

The department’s efforts to clear district streets will be much easier as a result of two new haulster trucks that Councilman Greenfield funded specifically for use in the areas served by the Brooklyn 12 Sanitation Garage. The trucks were paid for with $305,708 that Councilman Greenfield secured in last year’s budget to prevent a repeat of the Blizzard of 2010, when residents were left snowed in for nearly a full week because local DSNY crews didn’t have adequate equipment available. The haulster trucks are smaller and more versatile than full-size plows and are also used to clear narrow streets, dead-ends, crosswalks and to spread salt to prevent ice from forming.

“After stopping by the sanitation depot this morning, I am confident that the hardworking sanitation workers of our neighborhood garage are prepared to handle whatever this storm brings. I wanted to make sure that they have all the necessary equipment to quickly clear our streets of snow and ice, which is why I funded the purchase of two snow removal trucks in the city budget. My thanks to Commissioner John Doherty, Deputy Chief Steve Montanino, Superintendent Mike McEvoy and the entire crew that works so hard, both in response to storms and throughout the year,” said Councilman Greenfield.

Workers have been preparing for the storm since yesterday, when they equipped their trucks with snow plows and tire chains. In addition, all workers have been called back from vacation time and put on alert to be called in. While plowing and salt spreading does not begin until the snow actually starts falling, crews are already positioned across the district to begin immediately responding as soon as the expected storm arrives. In all, the Brooklyn 12 Garage has at least seven spreaders and 20 plows working in the area, including the two haulster trucks provided by Councilman Greenfield. Citywide, the Sanitation Department has more than 250,000 tons of salt, 1,800 trucks and 350 spreaders ready to fight the storm, which is expected to intensify tonight. In addition, residents can now track city snow plows in real-time using an app on nyc.gov.

Forecasts of projected snowfall as a result of the storm have varied greatly, with predictions calling for anywhere from 6 to 16 inches of snow accompanied by winds of up to 60 miles per hour. In addition to icy, dangerous conditions on streets and sidewalks, Councilman Greenfield is urging residents to be aware of downed power lines and falling trees and branches, especially in light of Hurricane Sandy, which weakened many tree limbs. Any residents who lose power should immediately contact Con Edison at 1-800-75-CONED, National Grid at (718) 643-4050 or Long Island Power Authority at 1-800-490-0025.