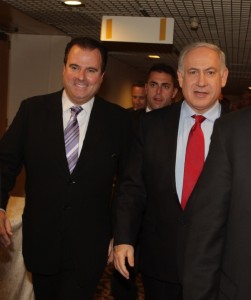 The eyes of the world at large, and the Jewish community in particular, were fixed on Israel during November of 2012. With over 1,500 rockets from Gaza bearing down on Israeli civilians, a barrage of destruction seemed imminent. However, only 55 rockets were able to fall in urban areas because the rest had been effectively disabled by the Iron Dome anti-missile defense system, saving the lives of many innocent men, women and children residing in Southern Israel. The Iron Dome Defense System, created by Rafael Advanced Defense Systems, was originally developed by Israel but later received considerable funding from the United States. Many members of Congress and the Obama administration worked tirelessly to ensure that proper funding was allocated to this life-saving system.

The Iron Dome Tribute luncheon, which is scheduled to take place in the United States Senate on February 27th and is chaired by prominent Los Angeles based Jewish philanthropist and businessman Robert Rechnitz,  enables these efforts to be recognized in the presence of Jewish leaders and freedom-loving activists who value human life.

The Yeshiva World News sits down with Chairman Robert Rechnitz to find out more about this exciting event.

YWN: Before we discuss the Tribute can you give us background on Iron Dome?

Robert Rechnitz: The Iron Dome is a mobile all-weather air defense system. The system, created as a defensive countermeasure to the rocket threat against Israel’s civilian population on its northern and southern borders, designed to intercept and destroy short-range rockets and artillery shells fired from distances of 4 to 70 kilometers away and whose trajectory would take them to a populated area.

YWN: How did the Iron Dome all come about?

Robert Rechnitz: During the 2006 Second Lebanon War, approximately 4,000 Hezbollah-fired rockets, the great majority of which were short-range Katyusha rockets, landed in northern Israel, including on Haifa, the country’s third largest city. The massive rocket barrage killed 44 Israeli civilians and caused some 250,000 Israeli citizens to evacuate and relocate to other parts of Israel while an estimated 1,000,000 Israelis were confined in or near shelters during the conflict.  To the south, more than 4,000 rockets and 4,000 mortar bombs were fired into Israel from Gaza between 2000 and 2008, principally by Hamas. Almost all of the rockets fired were Qassams launched by 122 mm Grad launchers smuggled into the Gaza Strip, giving longer range than earlier launch methods. Nearly 1,000,000 Israelis living in the south are within rocket range, posing a serious security threat to the country and its citizens.

YWN: What is the purpose of the Iron Dome Congressional Tribute?

Robert Rechnitz: The Iron Dome Tribute Event, which is being coordinated by the NYC and Washington DC, based Friedlander Group under the leadership of CEO Ezra Friedlander, makes it possible for prominent Democratic and Republican members of Congress to unite and join with leaders in the Jewish community to pay to tribute to the success of the Iron Dome anti-missile defense system and celebrate the enduring relationship between the United States and the State of Israel. This special event also presents a unique opportunity to recognize  members of Congress who played and will continue to play an important role in securing the funding and overall support for Iron Dome in the presence of numerous influential Jewish leaders and freedom-loving activists.

YWN: Who will be participating?

YWN: What is your objective by holding this event in the Congress?

Robert Rechnitz: I believe that holding the event in Congress is a true expression of gratitude on behalf of the American Jewish community and those who value human life. The way I see it, the Iron Dome System primarily accomplished two significant things: It played a major role in the Israeli government’s decision against a full-scale ground invasion of Gaza, and it saved the lives of countless civilians by protecting them against a barrage of deadly rockets fired at their neighborhoods and their homes.

YWN: What does this event mean for the Jewish community?

Robert Rechnitz: This event promises to be truly unifying for the Jewish community. It is a unique opportunity for Jewish leaders to gather with members of Congress and celebrate a shared triumph. The Iron Dome is a manifestation of the strong U.S.-Israel alliance and is something that those of us in the pro-Israel community view as a true success.

YWN: What motivated you to chair this event?

Robert Rechnitz: For many years, I have enjoyed close relationships with the highest echelons of the Israeli government. I am personally acquainted and a supporter of Prime Minister Benjamin Netanyahu. I am a proponent of a strong U.S. defense policy and I feel that the Iron Dome represents the essence of the U.S.-Israel alliance, which is a strong motivation for taking a leadership role in this important tribute. At this point I feel I need to highlight several individuals who have and are going to play important roles in this historic event: They are: Co Chairman Lee Samson of Beverly Hills, Phil Rosen, as well as my son Jona Rechnitz of NYC, Paul Raps, Stanley Treitel and others.

YWN: I see that the event will also pay tribute to the late Senator Daniel Inouye. Can you tell me a little bit more about that?

Robert Rechnitz: We felt it would appropriate to honor the memory of the Senator Daniel Inouye, whose connection to the Jewish people emanated from his soul. As many know, following World War II, Senator Inouye was recovering from the loss of his arm in combat and upon learning about the struggles and triumphs of Holocaust survivors began a lifetime attachment to the Jewish people and later, the State of Israel. Senator Inouye had a deep connection with the Jewish people that he expressed through spirited advocacy on their behalf and his steadfast support of Israel. He was a true American patriot and hero and his valuable contributions to the battle for justice, freedom and civil liberties will forever endear him as a true American patriot and hero.