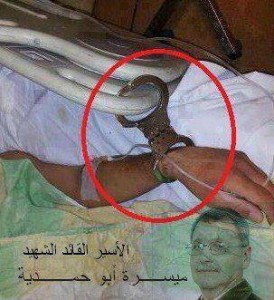 Some things never change. Today a photo appeared on the internet, passed off as being an image of Maysara Abu Hamdiya, a Palestinian prisoner who died this week in an Israeli prison. Hamdiya suffered from cancer, and the allegation is that he did not receive the medical treatment he needed. The photo shows him handcuffed to a hospital bed and insinuates that he received cruel, inhumane treatment during his prison sentence.

The Israeli Prison Services spokeswoman, Sivan Weizman, explained that the prison had taken all the necessary precautions for Abu Hamdiya’s health, including transferring him to a prison closer to hospital facilities should he need them.

Hamdiya was arrested for his involvement in a terrorist acts in 2002 and passed away this week from effects of cancer.

Written on the image are the words “prisoner, commander and jihadist”, along with a profile picture of Maysara Abu Hamdiya.

The image implies that Abu Hamdiya handcuffed to a hospital bed. In reality, the arm pictured above is a cropped portion of a photo taken in Syria of a hospitalized rebel. The photo was originally published on December 8th, 2012. (Click on image to enlarge) 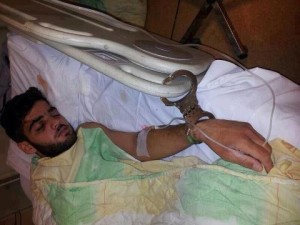