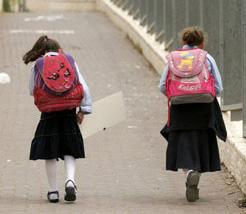 The Israeli Supreme Court on Thursday morning 8 Iyar 5773 convened to hear the case brought by chareidi attorney Yoav Lalum and his Noar K’halacha organization alleging discrimination against Sephardi girls in Ashkenazi Beis Yaakov schools. The petition was pulled by Lalum after Justices Edna Arbel, Chanan Meltzer and Uzi Fogelman indicated the petition was “too general” and as such, it would be very difficult to adjudicate. Arbel said the allegations contained a “ping pong” that would be difficult for the court to address.

Lalum filed the petition against the Ministry of Education, the minister of education, as well as various departments in the ministry, and the Jerusalem, Bnei Brak, Modi’in Illit and Betar Illit municipalities.

Lalum explained that he fears the situation is far more severe than depicted in his brief for many of the victims remain silent for one reason or another and their situation is not made known. Justice Fogelman added the court cannot solve a matter in which there may be 30-40% of Sephardi girls falling prey to discrimination, but the court may ascertain if the agencies involved are acting in an unbiased transparent fashion regarding all applicants without consideration of one’s ethnicity.

Justice Meltzer added that despite allegations of a discriminatory policy, the allegations are not backed up with proof, explaining “suspicions are insufficient”.

Ministry of Education attorney Shoshi Shmueli told the court the ministry has made some fundamental changes and today, the level of transparency has been improved significantly towards preventing any such instances.

Lalum stated “One may ignore the situation and say ‘everything is okay’” adding “davka it is the Ashkenazim who are embarrassed by the situation…I am aware of the difficulties [facing the court] but I cannot close my eyes. I feel I have presented concrete cases and I cannot do more. Why must some students travel? Why must a student from Elad travel to Bnei Brak for school? It can be done. We can change but this compels a desire to make a change”.

After the break Arbel told the parties the court feels the documents lack the necessary proof and therefore, the court recommends pulling the petition, which Lalum agreed to do. Arbel added “The ministry and other authorities have committed to monitor the situation and if there is concrete evidence of such discrimination in the future, you have the right to bring them before us again.”

Lalum explained his decision was based strictly on the realities surrounding the court’s comments and in no way reflect the reality of the existence of discrimination against Sephardim by Ashkenazi schools.