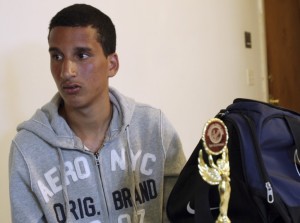 A teenager said he is scared to go outside after he was portrayed on the Internet and on the front page of the New York Post as connected to the Boston Marathon bombings.

Photos of Salah Eddin Barhoum, 17, and friend Yassine Zaime were posted on websites whose users have been scouring marathon finish line photos for suspects. The two were also on the Post’s front Thursday with the headline: “Bag men: Feds seek these two pictured at Boston Marathon.”

The Post reported later Thursday that the men weren’t considered suspects, and the FBI has since identified two other men as suspects in the bombings Monday that killed three and injured more than 180.

But Barhoum, a track runner at Revere High School, said he is convinced some will blame him for the bombings, no matter what.

He was so fearful on Thursday that he ran back to the high school after a track meet when he saw a man in a car staring at him, talking into a phone, he said.

Barhoum added he received more than 200 messages online Wednesday, with one commenter from Oregon asking: “How could you do that? Did you even think about the consequences?”

Barhoum said he won’t feel safe until the actual bombers are caught.

Attempts to reach Zaime were not immediately successful.

Barhoum’s father, El Houssein Barhoum, who moved his family from Morocco five years ago, said he is worried his son will be shot and also fears for his wife and two young daughters. He said he can’t go to his job as a baker in Boston.

“Right now, we are not secure,” he said. “So, the news (media), when they put something, they should be sure about the information.”

In a statement, New York Post editor Col Allan said, “We stand by our story. The image was emailed to law enforcement agencies yesterday afternoon seeking information about these men, as our story reported. We did not identify them as suspects.”

Men with bags at the marathon have been a focus of Internet scrutiny, because officials believe that’s how the bombers carried in the explosives.

Barhoum said there are only two reasons he’s been labeled a suspect: his bag and his brown skin.

Barhoum said he was at the marathon with Zaime, a friend from the running club, hoping to run a portion of it behind the official field. They took the subway, and Barhoum’s bag was for his running gear.

But the pair got the address wrong and ended up at the finish line instead of the start. Barhoum said they decided to stick around to see the top runners, then left.

Barhoum said that late Wednesday, friends started flagging the online photos, and commenters started their work. He said he was so upset, he visited police early Thursday to clear his name. He said they advised him to restrict access to his Facebook account.

When the Post published the photo later Thursday, a bad situation got worse, Barhoum said.

“It hurts because the person who did it must be happy right now, looking at the people who are getting blamed,” he said. “And I’m one of them.”