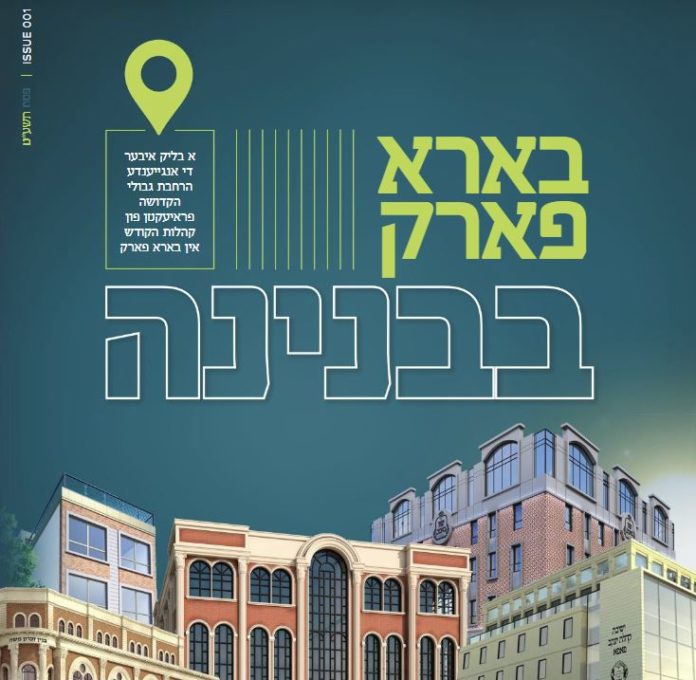 In news that is sure to excite the community, editors have announced the launch of a new Yiddish periodical titled Boro Park B’vinyana, a magazine which will offer in-depth insight and information behind the latest building projects undertaken by Mosdos and Shuls in the neighborhood.

In recent years, our area has seen explosive growth and nowhere is this more apparent than in the building of many new magnificent shuls and school buildings which dot the entire neighborhood. But as we know, growth also means growing pains, and the construction process can be a frustrating one for neighbors and drivers. Additionally, new buildings sometimes change the nature of a block or street corner, something which is often unappealing to longterm residents.

The editors of the magazine realized that there is a dearth of information available to curious residents who want to know more about what is being planned, what is in the works and what the end project will look like. They felt that local residents would benefit greatly from gaining more intimate knowledge about these projects and the people and motivations behind them.

The first issue of the magazine is being released in time for Chol Hamoed Pesach so that readers can spend their time off reading up on these exciting initiatives. With features covering a dozen projects, this issue is a treasure trove of inside information on the construction undertakings the community is talking about.

Each new building or renovation will contain a brief introduction to the background of the endeavor, and will be followed by an exclusive interview with one of the askanim or board members who are intimately involved in the proceedings. “This magazine was fascinating,” said Chaim Yitzchok Markus, a Borough Park resident who reviewed an early copy. “We tend to think of new buildings in terms of traffic and money but forget that there’s always a storyline behind it and so many people who are counting on a job well done.”

It is planned that the publication will be released periodically with new issues shining light on additional projects and updates on previous stories. The editors hope that those with a story to share will contact them at [email protected] so that their story can also be read by an eager audience.

While the prices of these construction projects run in the millions, the magazine is absolutely free of charge to the community.

A PDF version can be found right here.