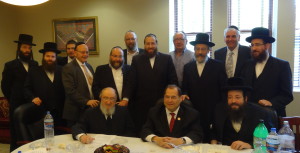 During a meeting with community leaders in Borough park, Sunday afternoon, Congressman Nadler announced new Bill he’s going to introduce on the floor of the House on Monday that would provide additional tax relief for families in need. Pam Brier, President of Maimonides Medical Center, was among other who participated in the meeting held at the Avenue Plaza hotel.

In direct response to the concerns of many of his constituents, Nadler will introduce the Tax Fairness for All Families Act of 2013 this week in order to ease some of the financial burdens that keep large families living in or near poverty. The bill would provide an increasingly larger Earned Income Tax Credit (EITC) for families with more than 3 children.

“My district has many large families, often living in or near poverty, and many need help with daily expenses so that they don’t slip through the cracks,” said Nadler. “The burden of balancing work, family and community life – especially in expensive areas like New York City – is very challenging. My bill responds directly to the needs and concerns of large families, and would help them pay for basic necessities, like food, rent, transportation, and other costs that families with more children incur.”

The congressman admitted that middle class families would be left out from the bill, since the intent of focusing on low incomes families is to make sure it hardly affects the overall budget. “This doesn’t help anybody without a low income. So, what percentage in the population is low enough income to get the EITC,” Mr. Nadler explained. “Number 2, what percentage of that population has more than three kids? Maybe it is fairly large in Borough Park. Nevertheless, it is a very small slice of the population.” Therefore the congressman asserted, “This is not a very difficult burden for the budget.”

Mr. Nadler thanked Mr. Yoel Rosenfeld of Bobov, a community activist, who initially brought up the idea during a recent meeting with the congressman.