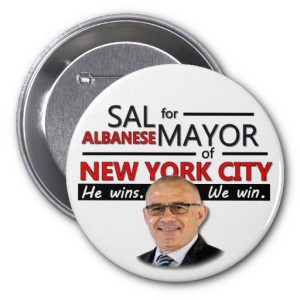 With less than 90 days to go, It appears the gloves are finally off. The lesser known candidates, who have suffered from Anthony Weiner’s entry, are now becoming more willing to go on the attack against each other in person.

At a Latino oriented forum in the Bronx on Wednesday, Sal Albanese accused Public Advocate Bill de Blasio of fibbing, disputing his assertion that a garbage transfer station in Red Hook was actually within “walking distance” of Mr. de Blasio’s Park Slope home, according to Politicker’s Ross Barkan.

“Sal, Sal, I have long tolerated your reconfigurations of the truth and I actually can walk easily from my house at 11th Street and 6th Avenue to the Hamilton Avenue station,” Mr. de Blasio shot back. “I guarantee it Sal, I’ll come walk with you one day.”.

Mr. de Blasio also unleashed on Speaker Quinn. “I have to take issue with Speaker Quinn saying that she wants to differentiate from Bloomberg’s policy on this because she has been the mayor’s chief ally while he’s been doing this,” Mr. de Blasio said at one point, responding to a question about the supposed inadequate funding of Latino nonprofits. “The third term was brought to us by Speaker Quinn working in cooperation with Mayor Bloomberg to change the term limits law.”

To which Ms. Quinn, with “a strained smile on her face,” hit back at Mr. de Blasio for doing little more than issuing a “press release” to prevent nonprofit cuts from as public advocate

“When the mayor had a proposal out there to close down senior centers … with my colleagues I didn’t just criticize it. I just didn’t have a press conference; I stopped it,” Ms. Quinn said. “Last year, when there was proposal to close daycare centers all over the city, ones in the Bronx and communities of color that didn’t score well enough on the [request for proposals], we didn’t just issue a press release, we put that money back in the budget … So that’s what it’s about, not way you say, not what you promise, what you’ve done.”

“I just have to have a ‘get real moment’ here,” replied the public advocate. “You can’t say you brought back the mayor back for a third term and you made things a little less bad. It doesn’t work that way.”

Bill Thompson, who is fighting for second place, fought with Ms. Quinn over the Upper East Side waste transfer station, while Mr. de Blasio chimed in to slap Thompson.

After Ms. Quinn defended the Upper East Side station–Mr. Thompson interrupted her several times, blurting out, “this is not true” and “we can find other sites”– Mr. de Blasio took a rare shot at Mr. Thompson, according to Barkan.

“I have to say, with absolute respect to Bill Thompson, you can’t have it both ways on this issue,” he said. “The site has to stay there–there’s no two ways about it.”