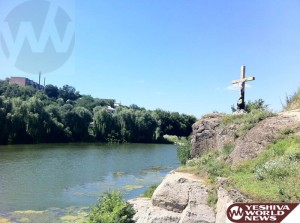 A very large crucifix with Yeshu’s figure was positioned in the Tashlich lake used by Yidden visiting the tziyun of Rav Nachman in Uman. According to reports from the Ukraine, it was positioned at the location by an anti-Semitic group wishing to offend the Jews visiting the area.

Uman police officials and the deputy mayor of the city released a message that the placement of the crucifix at the location is illegal and done without the knowledge of city officials. They add it appears the incident was intended to spark tensions between the Jewish community and their Christian neighbors who live side by side in harmony.

Shimon Buskila, the director of the Breslov Center adds “We are working with relevant officials to have it removed. It should be clear it was placed at the location illegally.”