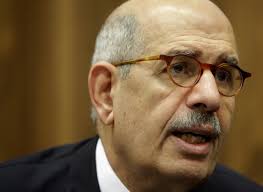 ElBaradei, 71, was mandated by the main alliance of liberal and left-wing parties, the National Salvation Front, and youth groups that led anti-Mursi protests as negotiator with the armed forces and was present when armed forces commander General Abdel Fattah al-Sisi announced the military takeover on Wednesday.

“ElBaradei is our first choice,” a source close to the military high command said, speaking on condition of anonymity because of the sensitivity of the situation.

“He’s an international figure, popular with young people and believes in a democracy that would include all political forces. He is also popular among some Islamist groups,” the source said.

Political sources said ElBaradei, who won the Nobel peace prize for his work as head of the International Atomic Energy Agency (IAEA), would also be acceptable to Western governments that have bent over backwards to avoid calling the removal of Mursi and his Muslim Brotherhood a military coup.

Political sources said other figures under consideration were veteran ex-prime minister Kamal al-Ganzouri, who headed a transitional government in 2011-12 after the uprising that ousted Hosni Mubarak, and Farouk El-Okdah, a respected former central bank governor.

A decision was likely later on Thursday, the sources said after constitutional court chief Adli Mansour was sworn in earlier in the day as interim head of state.

ElBaradei has long pressed for Egypt to sign a $4.8 billion loan deal with the International Monetary Fund, which Mursi’s government initialed last November but never ratified or implemented.

The deal would help kick-start an economy severely battered by the collapse of tourism and foreign investment due to political uncertainty since the 2011 revolution. But it would also mean implementing potentially unpopular cuts in fuel and food subsidies, and tax increases.