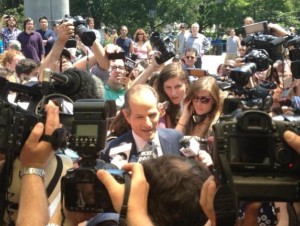 It’s the outsiders vs. the insiders all over again. Taking away media focus they so much need these days, the establishment Democratic candidates for mayor, those who rely on media spin, were quite dismissive of the idea of a “Comptroller Spitzer.”

Though Anthony Weiner may know a step or two in comeback rollouts, the former congressman did not weigh in Monday on the possibility of Eliot Spitzer serving as the next Comptroller of New York City. “I am not paying a great deal of attention to the ins and outs of other races,” said Weiner, according to NY1’s Courtney Gross. “I think everyone was surprised, but it hasn’t changed my life at all.”

Nonetheless, Weiner did offer Spitzer a piece of advice. “If I were to offer any candidate running for any office advice, it would be to focus on those things. Focus on what the middle class is looking for, try to talk about ideas,” Weiner said.

Weiner’s Democratic rivals, however, seized the opportunity to capitalize on Weiner and Spitzer sharing the same ticket – two politicians caught in inappropriate behavior.

“Maybe these celebrities get attention for a period of time in the media, but I think the public does not take lightly a violation of trust,” said Public Advocate Bill de Blasio.

“On some level though, this is a huge affront to women in New York City and far beyond,” said City Comptroller John Liu.

“I don’t think we have seen much from either of these men that would put them in a position where they would have earned a second chance, redeemed themselves from their selfish behavior and deserved a second chance by New York’s voters,” said City Council Speaker Christine Quinn.

On the other side, former city councilman Sal Albanese, who has touted his candidacy as an outsider, welcomed Mr. Spitzer to the race. While Mr. Albanese has been a very harsh critic of Weiner, the idea of Mr. Stringer running unopposed was “bad for democracy and bad for New Yorkers to elect anyone without a real race,” Mr. Albanese said in a statement. Adding, “Eliot Spitzer is eminently qualified for the job, so I say we give him a fair hearing and let the voters make their choice in September.”

Quinn, de Blasio and former City Comptroller Bill Thompson reiterated their support for Mr. Spitzer’s opponent Scott Stringer, who has already racked up the support of the Democratic establishment.

“I have all of my support and all of my bets on Scott,” said Quinn. “And no one should bet against him. He will be the next comptroller.”

“Scott Stringer is the progressive reformer we need as NYC Comptroller. Scott has always focused on creating opportunities for working families in New York, and I’m proud to stand with him in his campaign for NYC Comptroller,” Mr. de Blasio added in a statement released Sunday night.