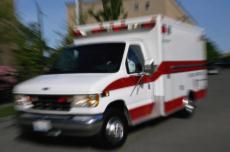 Chabad Shaliach in Russia Rabbi Ovadia Iskov, Chief Rabbi of Derbent, was seriously injured by gunfire. The rav, a man in his 40s, returned from shechita when an anonymous man fired at him near his home striking him in his chest. The rav was transported to a local hospital where he is reportedly fighting for his life. Police are involved in a manhunt for the perpetrator who fled the scene.

Police are proceeding on the premise that the shooting was a hate attack, as local officials reported to his wife and four children. The rav and his family have been in the area for nine year and neighbors feel that it must be a hate crime for there is no other reason to explain the shooting attack.

Israel’s Foreign Ministry is monitoring the situation, adding the location of the shooting is six hours from Moscow.

12:01: With the assistance of Russia’s Chief Rabbi Berel Lazar, a ZAKA medical team is scheduled to leave Eretz Yisrael at 15:00 on a charter flight in the hope of being able to stabilize the rav and transport him to Israel for continued medical care.

UPDATE 17:07 IL: Rabbi Ovadia Isakov, 40, Chabad-Lubavitch emissary and chief rabbi of Derbent in the Republic of Dagestan, is undergoing emergency surgery after being shot by an unidentified assailant near his home.

The rabbi sustained an exit wound in the chest and was rushed to the Derbent central city hospital in grave condition. Rabbi Berel Lazar, the chief rabbi of Russia has chartered a plane to transport Isakov to Israel for treatment as soon as his condition stabilizes.

Initial reports indicated that Isakov was returning from performing ritual slaughter for kosher meat when the gunman opened fire on him as he stepped from his car near his home. Russia’s Investigative Committee said in a statement that the rabbi’s Jewish appearance “is among the possible motives investigators are considering for the attack.” The shooter escaped from the crime scene.

The acting head of Dagestan, a majority Muslim territory bordering Azerbaijan, condemned the attack, blaming it on “extremists and terrorists,” while it was reported on Israel Army Radio that the attack was most likely criminal, not terroist in nature.

A native of Derbent, Isakov was described by friends as “an artist, a very peaceful man.” Following years of rabbinic study in Moscow, Isakov and his wife Chaya Miriam arrived in the city nine years ago as Chabad-Lubavitch emissaries.

This was not the first time Isakov has been the target of an attack. In 2007 the Isakov home was vandalized by assailants in the morning hours, while the rabbi, his wife and children, including a 9-month-old baby, were in the bedroom.