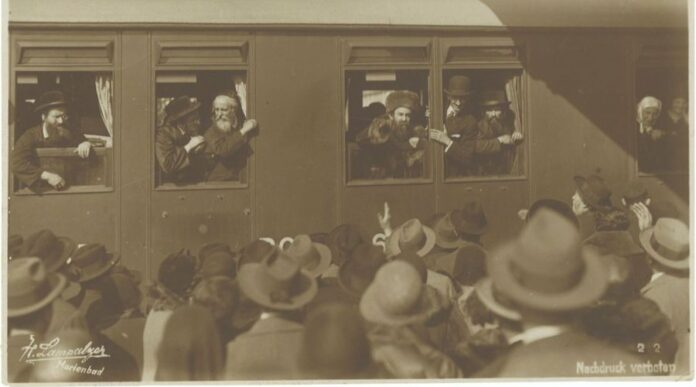 A postcard with a previously unknown photo of the Belzer Rebbe parting from his chassidim at a train station in Marienbad during the Holocaust was recently discovered.

The postcard, which has a Nazi postmark comprised of two swastikas and a German Reich stamp, was sent to a Nazi soldier serving in the Air Force in 1939, with a messaged typed on the back: “Allow me to send you warm greetings from Marienbad.” The signature is handwritten.

Marienbad, a spa town currently part of the Czech Republic, had a small Jewish community of 450 Jews in the 1930s and was a popular health spa destination for Jewish visitors. In 1937, the third Kennesia HaGedolah of the Agudas Yisroel was held in the town.

A local German photographer, Hans Lampalzer, who regularly photographed the rabbis who lived in or visited the town, snapped the photo of the fourth Belzer Rebbe, Rav Aharon Rokeach (1880 – 1957).

A photo of the Belzer Rebbe was sent as a postcard to a Nazi soldier https://t.co/KcCrOOv9dt pic.twitter.com/arLkd711lx

Although the image of the Belzer Rebbe at the train station is known through other postcards bearing photos by Lampalzer, this particular image was unknown and is a rare discovery.

Some of Lampalzer’s photos were published in Der Stürmer, a virulently anti-Semitic tabloid-style newspaper published by Julius Streicher, a member of the Nazi party and one of Hitler’s earliest followers. Der Stürmer played a central role in the Nazi propaganda war against the Jews.

When Marienbad – as part of the Sudeten Region – was annexed to Nazi Germany during the Sudeten Crisis in 1938, most of the town’s Jews left and those who didn’t were ultimately arrested by the Nazis. The local shul was burned down and the area was converted into a park.

The Belzer Rebbe was smuggled out of Europe during the Holocaust with the help of his chassidim, ultimately arriving in Eretz Yisrael. Unfortunately, he was left bereft of his entire family – his wife, children and grandchildren were killed by the Nazis.

The postcard will be auctioned by the Kedem Auction House in Jerusalem.