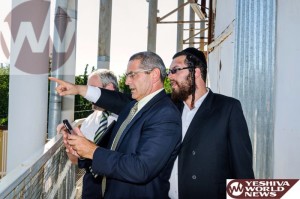 As Breslov officials in Uman are busy preparing to host tens of thousands of mispallalim expected to arrive for Rosh Hashanah, Israel’s ambassador to the Ukraine visited the complex. Work at the tziyun of Rav Nachman of Breslov ZY”A is already in full swing as cooks are preparing and freezing food that will be required to feed the many guests.

The high-level delegation met with leaders of the World Breslov Organization and they were briefed on arrangements for the tens of thousands of visitors – how they are to be housed, fed and security arrangements during the Tishrei Yomim Tovim.

The delegation then met with Uman officials as well as district officials, reviewing preparations for the event with security, fire and other officials. They also discussed the need for a sturdy bridge that will safely accommodate the many visitors who must make their way to the sleeping quarters.