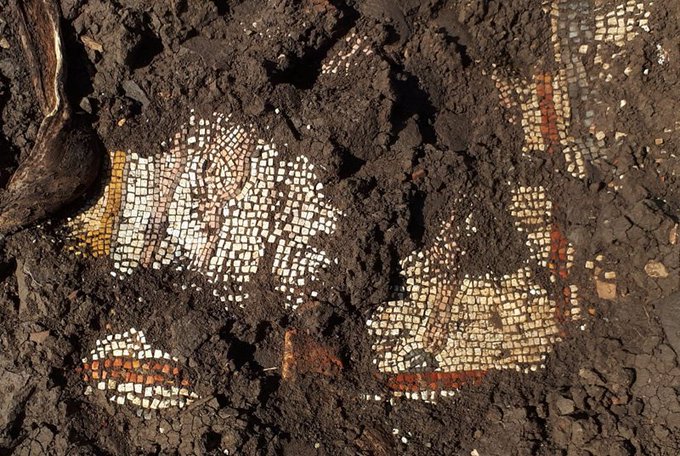 Fragments of a rare mosaic floor were discovered during the excavation of a shul in the Golan from the era of Roman rule over Eretz Yisrael, a statement from the University of Haifa said on Monday.

“This is early testimony of a colorful and decorative mosaic in a shul in the Golan dating back to the third century CE, a period about which there is almost no information about the Jewish community in the Golan in particular, and few remnants of shuls in Israel in general,” said Dr. Mechael Osband of the Zinman Institute of Archeology at the University of Haifa.

“In the third century CE, we see an interesting combination of the continued tradition of the shuls from the era of the second Beis Hamikdash [before Roman rule], such as the seating arrangements and the relatively unadorned architectural style – with the addition of new elements which in time became more common in shuls, such as colorful mosaics featuring animals.”

The university stated that until recently, archaeologists believed that Jewish life in the Golan ended when the Romans destroyed Gamla in 67 CE, and the discovery of the shul in Majdulia, as well as other discoveries in the past several years, are regarded as very significant.

The mosaic shows that the floors of the lateral halls of the shul were colorful and richly decorated with geometric patterns. The mosaic in the main hall, the central hall, is even more complex and rich, and despite its poor state of preservation, it’s possible to identify images of the feet of animals – feet of birds and other unidentifiable animals.

The researchers believe that the elaborately decorated mosaic is a testimony to the fact that shuls during the Roman era were transforming from a place devoted almost exclusively to learning Torah to a place of tefillah b’tzibor.

“We know that shuls at the end of the period of the second Beis Hamikdash were mainly used as a place of Torah study,” Osband explained. “At the end of the Roman period and especially during the Byzantine period, shuls were used as a place for tefillah, a type of ‘mikdash me’at’ and therefore they are more magnificently decorated and it wasn’t uncommon to include fancy mosaics.”