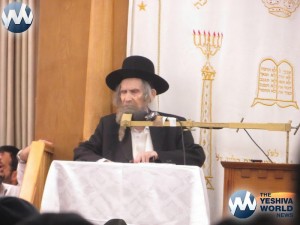 With the start of the Elul zman HaGaon HaRav Aaron Yehuda Leib Shteinman Shlita was set to give a shiur in his Orchos Torah Yeshiva. This year the yeshiva has a new branch in the south, in Moshav Zerua. This is in addition to the branch in Carmiel, Rina Shel Torah, and of course the main yeshiva in Bnei Brak.

The newest branch of the Gadol Hador’s yeshiva has attracted dozens of talmidim from around the country but unfortunately, it appears some of the non-frum residents of that community are opposed to their presence. Kikar Shabbos reports that in recent days, as the finishing work was underway to ready the new yeshiva for the new zman, some of those residents arrived and tried to prevent them from continuing. There was a need to involve police who dispersed the protestors, thereby permitting the continuation of the finishing work.

Rav Shteinman was scheduled to greet the new talmidim in the moshav on Thursday, 2 Elul, officially opening the yeshiva and the Elul zman. The report states that residents who oppose the yeshiva’s presence planned a protest to coincide with Rav Shteinman’s arrival, even threatening to disrupt the shiur. As such, the decision was made that Maran would cancel the planned shiur.