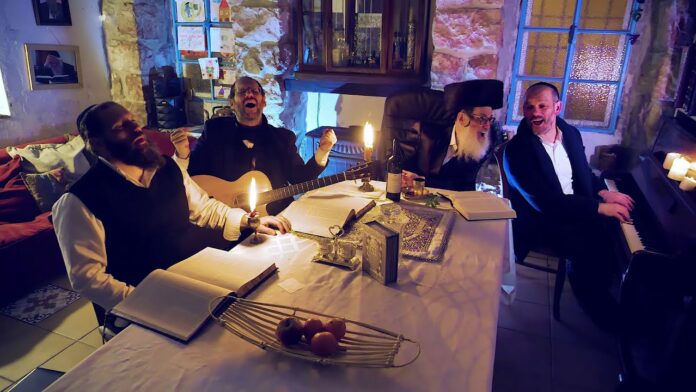 The idea for the song began with the bell at the beginning of the morning at the cheder right opposite Yonatan Razel’s home. “Every time I kept hearing this song, until it became a part of our Shabbos zemiros. I said to my brothers, ‘Let’s record it and it will give us closure.’”

Yonatan Razel, together with his father, Reb Micha, and brothers Reb Aharon and Rav Yehuda present a unique song “Achas Shoalti”. The song is a musical expression of the spiritual experience which accompanied the whole family during the previous cycle of learning Shas, and even more so during the current cycle in the kollel for learning Daf Hayomi b’iyun which the family operates and participates in.

“The song completes not only for me, but also for my father, Aharon and young Yehuda, seven and a half years of learning in the Daf Hayomi kollel,” reveals Yonatan, the family’s oldest son. The song was composed by Pinky Weber and the special vocal arrangements were written by Yonatan Razel as part of a special production by Dirshu.

How did it begin?

Yonatan is in kollel every day for the morning seder until 2:00 p.m. For the first six years, he studied in Rav Orlansky’s kollel on Sorotzkin St., in a kollel where avreichim study for 4 hours daily – two hours learning the day’s Daf Hayomi and for two hours they review the previous day’s daf, with tests to spur them on and the accompaniment of the Dirshu organization. “Studying demands from us to live the daf with commentaries, pilpul, summaries, and explanations – this is mamash iyun with Tosfos, Rishonim, halacha, basically everything, it happened in the Aliyos Eliyahu Kollel where I began it.

When Yonatan’s son was born a year ago, the Jewish world was at the beginning of Maseches Chullin. “I felt the need to be nearer home, and I started a Daf Hayomi kollel in Givat Ze’ev, where I live.” Yonatan wanted to continue the seder of “two hours learning the day’s Daf Hayomi and two hours review of the previous daf,” and he set up the framework, and the head of the shiur is Rav Avraham Greineman, grandson of Rav Greineman…”

The story of the hasmada does not only belong to Yonatan but is a real family challenge. Four years ago his father, Reb Micha, together with his son Yehuda, established a kollel in Yerushalayim (the Ki Mizion Tetze Torah Kollel). Yonatan proudly notes that his little brother, Yehuda, is already finishing Shas for the second time, “but there it’s two sedorim a day with the Dirshu tests…” Yonatan relates about his brother Yehuda (Rav Yehuda!): “My little brother is a real ilui. Before kollel he gives a shiur in Nachlaot, a shiur that people have been attending for 14 years already, good Jews who love Torah, poor people alongside professors who live in Nachlaot – my father has been participating in this shiur from the day it began.”

Yonatan relates that on Shabbos and Yomtov, a challenging time for people deep inside Daf Hayomi, Rav Yehuda gives shiurim on both Fridays and Shabbos. “In my kollel, too, we learn on Fridays and Shabbos, so you don’t lose out,” he agrees that a lack of review on Fridays can be the only hole in the seven year long hasmada.

“My siyum,” reveals Yonatan, “is not just exciting, a track lasting seven and a half years, it is the most beautiful and amazing thing I’ve experienced in my lifetime. How much beauty, wisdom, and light! Every day I am totally astounded by the the beauty, depth, and spiritual wealth.” In general, the Daf Hayomi revolution encompasses the entire Jewish world. On every point on the globe they learn the same daf, which enables all those learning to remain synchronized – an excellent solution for a musician who performs around the world. “There are fixed places, such as South Africa, for example,” where I have a permanent chavrusa, a Daf Hayomi maggid shiur. I have amazing miraculous stories which help me cope with travelling to performances, like finding chavrusos in Brooklyn, in Manhattan. Once I was in Denver and I needed to leave in the middle of the shiur at sunrise to go to a meeting at 5:30 a.m., continue on to New York and find a shiur that would continue the same mishna I had stopped at that morning. It exists world-over. Once I was at the bar mitzva of an oligarch in Monaco and I found myself learning Daf Hayomi on the beach with friends there. It’s the most incredible and the most difficult thing that I’ve done in my life.”

For someone who completed a bachelor’s degree in conducting at the age of 16, it is surprising to hear that finishing Shas is the hardest thing he’s done in his life. “You have to understand, the Shas is constructed in a way that if you didn’t understand yesterday’s daf, you can’t continue learning today’s daf in isolation. It’s like a time bomb, and so you have to keep learning.”

How did the men of the family connect with the shiur and the song that emerged from it? “When we go on a family trip or learn together, Yehuda is the maggid shiur and we are all in this together, sometimes also at festive meals. Our entire family is musical, including Rav Yehuda, just that he chose to put his efforts into being a rosh kollel. This song, “Achas Shoalti”, began as a bell for recess at my son’s cheder that is right across the road from me. “Every time I kept hearing this song, until it became a part of our Shabbos zemiros. I said to my brothers, ‘Let’s record it and it will give us closure.’” Pinky Weber’s “Achas Shoalti” was first sung on the album, “Yingerlich”.