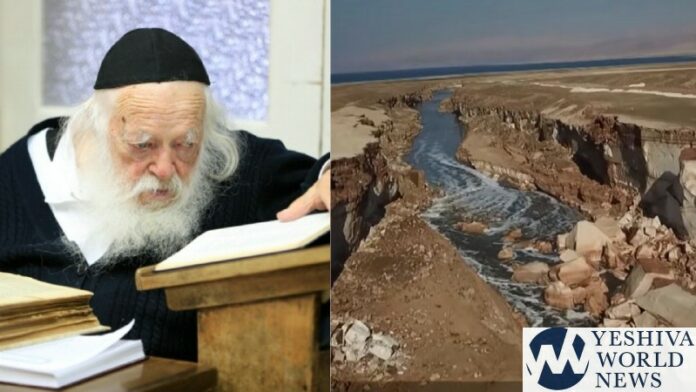 A few weeks ago, “the secret river” was revealed by Kan News, a river that was reportedly kept top secret as it is located in the commercial area of the Dead Sea Works, Kikar Ha’Shabbos reported.

The Ministry of Environmental Protection even confirmed that it wasn’t aware of the river’s existence.

But it turns out that at least one person knew of the river’s existence. Hagaon Harav Chaim Kanievsky wrote about the river 30 years ago in his sefer Derech Emunah.

Those who read Harav Chaim’s sefer found the chiddush puzzling as no one knew about the existence of the river in question.

Harav Chaim writes in his sefer that the sefer Ha’Admas Kodesh about Eretz Yisrael and its borders writes that the נהר שיילת וחילתא are in the north because there is no river in the south. Harav Chaim disagreed and wrote that he saw on a map that the Tzin River is the area there and questions this since it’s not continuous until the sea and therefore he wrote a chiddush that also today “the river is connected and flows slightly under the ground.”

This assertion led to Harav Chaim paskening that the river is the southern border of Eretz Yisrael. He also explains why the Torah doesn’t write the name of the river as the border like it wrote the Yarden – because the river doesn’t always flow.

Harav Chaim’s grandson wrote in a Parsha sheet which prints Harav’s Chaim’s chiddushim that “recently a new river was discovered which flows next to Yam Hamelech exactly in the place that Harav Chaim noted. Throughout the years, no one understood his words and said they weren’t correct. And following the discovery of the new river which flows ‘so to speak’ under the ground all year and is found exactly in the place that Harav Chaim wrote that there should be a river, his words are clarified.”

One of Harav Chaim’s students told Kikar HaShabbos that “it’s mamash Ruach Hakodesh. There’s no other explanation to the words that Harav Chaim wrote decisively dozens of years ago.”