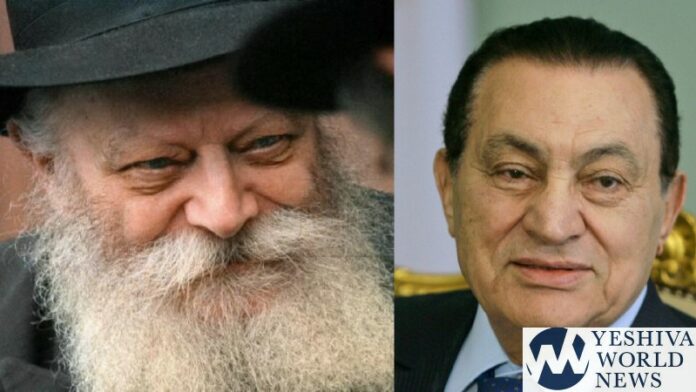 Yisrael Katzover, a senior journalist who covered the IDF for several decades for numerous Israeli newspapers and media channels was interviewed by Chabad many years ago about his many encounters throughout the years with the Lubavitcher Rebbe to receive advice and instructions about his work. One of the stories he told was a fascinating encounter with former Egyptian President Hosni Mubarak, who passed away on Tuesday.

“I visited Egypt 11 times and I had meetings with Hosni Mubarak many times during these visits. During my first visits – before Mubarak became ill – when we would come to Egypt with the [Israeli] prime minister, the defense minister, with others, he would take the journalists to a side room, sit with them and engage us in very interesting, open and personal conversations.”

“I remember one of these conversations. We were fix, six journalists and he hurried through the conversation that day for some reason. At the end of the meeting, he called me aside and asked me to go with him to another room.”

“We went into a room and he said to me: ‘I know what you’re writing, I know what your opinion is – I hear you at meetings. I have a special question for you. Can you explain to me what the Lubavitcher Rebbe wants from me?'”

[The Rebbe was adamantly opposed to the Egypt-Israel Peace Treaty and in general against making concessions to Arab countries, who cannot be trusted to adhere to the agreements. The Rebbe was aghast that Israel not only gave away parts of Eretz Yisrael, which Hashem entrusted to Am Yisrael, but they also endangered the security of millions of Jews by returning land to Egypt for a worthless piece of paper.]

“I was astounded. I said to him: ‘What does the honored president mean?'”

“He said: ‘He speaks against the [peace] agreement with us. He views us as a threat now and in the future. Why does he does do this? What does he have against me?'”

“We sat for a half-hour and had a very interesting conversation about the Rebbe. Who the Rebbe is, what his approach is, a bit of the history of Chabad. He had the same question that many Israelis asked then – why does the Rebbe live in New York? I explained this to him also. I explained the work of Chabad all over the world to him.”

“I felt he really absorbed what I said and I saw this was true many years later. It happened when the Rebbe instructed his chassidim to make siyumim for limmud H’Rambam.”

“The organizers in Israel decided that they wanted to make the siyum on the Rambam in the Rambam shul in Egypt. But they were worried that because of Chabad’s reputation – what the Rebbe said about Egypt – that they wouldn’t be granted permission to do so.

“The organizers asked me if I could speak with someone and I told them I’ll try. I spoke with the Egyptian ambassador in Israel, explained what Chabad wanted and after some clarification, he agreed to transfer the message.”

“I told him: ‘I don’t know who you’re going to speak with but I have a request. If possible, go up to the very top, to the president. I have no doubt that your president will allow it.'”

“He promised. I have no idea until today if he spoke with the president or not. After two days he got back to me and said: ‘I spoke with the top officials and there’s no problem at all for chassidei Chabad to come and make their siyum.'”

“The siyum took place and they took care of the chassidei Chabad very nicely. This just shows that ideas were planted, that even in Egypt and other places, the Rebbe’s position was formidable They respected his opinion and his breadth [of wisdom] reached Egypt, other Arab countries and other places.”