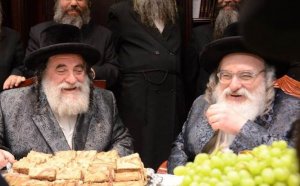 After decades of accepting state funds, it may very well be that the chareidi tzibur will follow the Neturei Karta model and break away from the state, ceasing to accept state funds.

With the gezeiros of the current administration leaving the chareidi tzibur wounded to put it mildly, the CEO of Mosdos Vishnitz Rav Yeshaya Yaakov Wertheimer announced in the chassidus’ קשר איתן bulletin that the red line is the state’s interference in the education of the children. He explains that if push comes to shove Vishnitz will not hesitate to break away from accepting state funds but regarding the education, there would be no compromise.

With funding for yeshivos, avreichim and monthly child allowances cut, the chareidi community comes into Rosh Hashanah 5774 with grave concerns regarding the survival of mosdos and families. One of the larger chareidi educational networks in Eretz Yisrael is that of Vishnitz, which represents tens of thousands of children in dozens of schools nationwide. As Finance Minister Yair Lapid and his colleagues have declared war on the chareidi tzibur, the latter is rethinking its strategy vis-à-vis its place in the State of Israel and it is entirely possible that Vishnitz and others will opt to cut all ties with the secular government. As a result of the new reality, with chareidi MKs seated in the Knesset opposition,

Wertheim quotes the rebbe shlita stating that despite the threats to cut government funding for schools, government involvement in the chinuch will not be tolerated, at any cost. He adds that unity is essential and everyone must remain firm and adopt one unified position.