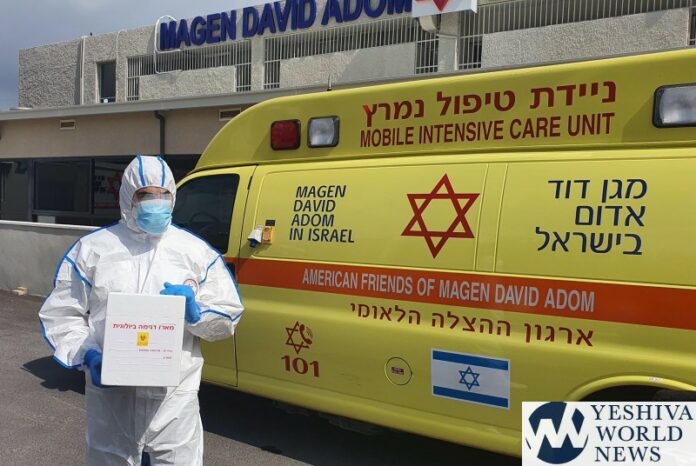 The number of people diagnosed with the coronavirus in Israel as of Sunday evening is 213, the Health Ministry stated. Two patients are in critical condition and 12 are in moderate condition. The rise is not nearly as sharp as other countries, and thankfully, Israel still has not a single death resulting from the disease.

195 people are in light condition after having contracted the disease. Another 12 are in moderate condition. Among those ill are 18 health workers, 7 doctors, 4 nurses, 3 logistics workers, 2 Magen David Adom personnel (a paramedic and a dispatcher), a physiotherapist and a pharmacist. There are, however, some 2,593 health care personnel in isolation, including 862 doctors and 823 nurses.

About 1,000 residents of Telzstone near Jerusalem are in quarantine after six members of one family, parents and four children, were diagnosed with the coronavirus on Motzei Shabbos.

Hundreds of residents had already entered self-quarantine before Purim due to a family who was hosted in Telzstone for Shabbos Parshas Zachor who was subsequently diagnosed with the virus and now hundreds more who had contact with the local family entered self-quarantine. Since the family was diagnosed a few days after Purim, the number of people who were in contact with the family members was higher than it would normally have been due to kriyas Megillas Esther.

The main Talmud Torah was closed and all the students were required to self-quarantine as well as the 7th-grade classes of a local girls’ school and the staff and babies of a local daycare. The famed Beit Hachlama for women after birth was closed.

The Telzstone local council opened a command center to assist residents. The large number of people required to self-quarantine means that families can’t depend on friends and neighbors to shop for them since most of them are also in quarantine and therefore the local council purchased basic supplies for hundreds of families.

The police closed Yeshivah Kol Torah, among many other yeshivas, on Sunday and the bochurim are returning to their home on Sunday evening.

Also on Sunday, the Religious Services Ministry ordered the closure of all men’s mikvaos throughout Israel, both public and private.

[Israel: Hastily Prepared Chuppahs Held In The Middle Of The Night To Preempt Ban Of Crowds Over 10]

Defense Minister Naftali Bennett signed an order on Sunday authorizing the IDF to mobilize 2,000 reserve soldiers to support the Home Front Command in preparing for a possible state of emergency due to the spread of the coronavirus.

As the Health Ministry’s new restrictions came into effect on Sunday, the Israeli public had an interesting time adhering to the new regulations, which include no gatherings of more than 10 people, while still attempting to go about their daily lives. In one instance, a wedding was held in the courtyard of Mercaz HaRav Yeshiva in Yerushalayim, where guests stood on separate balconies so as not to violate the new regulations of gatherings with more than ten people. Minyanim were held outdoors in many places and people kept a distance of 2 meters from one another whenever possible.

Another enterprising couple got married in a grocery store because the regulations for grocery stores allow up to 100 people to be present instead of just 10.