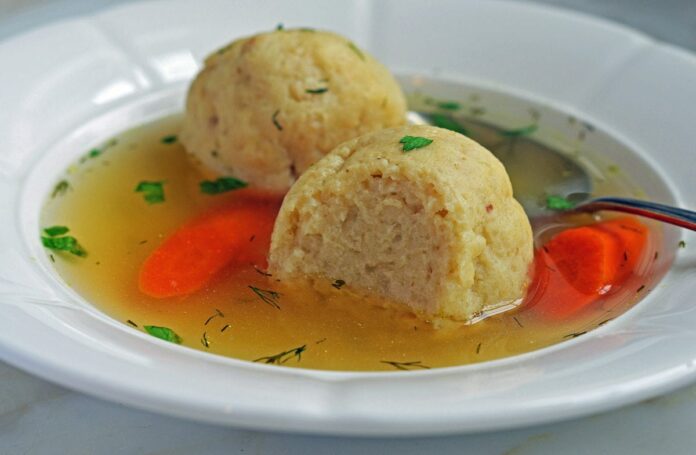 This Torah article is dedicated in memory of Elisheva Kaplan a”h and Yisroel Levin z”l, whose second Yartzeit is tonight. Miss Kaplan was the author’s student.

There is a minhag in many families of Klal Yisroel to avoid eating gebrochts.

And yet, the Shulchan Aruch (OC 461:4) writes that one fulfills the Mitzvah of Matzoh with matzoh shruyah – gebrochts, soaked Matzah – as long as the Matzoh remains intact and whole.  This is based upon the Gemorah itself (Psachim 41a) which states the very same law.

WHAT IS THE SOURCE

What then is the source for the custom of avoiding Gebrochts – dipped or wetted Matzoh?
Almost without exception, the custom to refrain from Gebrochts has spread throughout the Chassidic world and even among others.  How did this Minhag develop?  In this article we will attempt to trace the origin of this stringency.

The first reference this author could find that directly mentions the Minhag is the Olas Shabbos (453:3) who discusses a halacha in the Bach that Matzos should be baked prior to Pesach and not during Pesach, as Chometz is only batel before Pesach and not during Pesach.  The Olas Shabbos adds, “And one who is concerned for this stringency should not cook a baked Matzoh on Pesach either, for how is it different than baking?”

In other words, the Olas Shabbos is concerned that the Chametz that was mixed into the Matzoh but became nullified before Pesach is now re-awakened on Pesach itself.

The Knesses HaGedolah cited by the Mogen Avrohom (OC 473) tells us to avoid it as a fish coating because of a woman who did confuse it with flour.  The Pri Chadash (in Orech Chaim 461:2) disagrees and writes, “I say that this is all permitted  and we cannot make our own enactments, and who cares if one woman made a mistake in halacha..”

The Shaarei Teshuva in OC 460:2 after explaining that it is technically permitted, writes, “Nonetheless, one who wishes to sanctify himself with that which is permitted.. we do not stop him.”

The next time we see a concern for Gebrokts in print is in the response of Rabbi Shniur Zalman of Liadi, the GraZ or the Baal HaTanya.  The concern he raises is that perhaps the Matzoh was not kneaded sufficiently, and some unbaked flour remains on the Matzoh.  The soaking will thus bring about a Chometzizing process.

DIFFERENT THAN THE OLAS SHABBOS

The observant reader will note that this is a different concern that that mentioned by the Olas Shabbos.  The Machtzis HaShekel voices the same concern in 458:1 about the unbaked flour.  The Aishel Avrohom (Botshatch 447:4) is similarly concerned.

If we wish to find hints to the common practice of avoiding some form of Gebrokts – we can.  The Gemorah in Psachim (40b) discusses an item called Chassissi which the workers of the house of the Raish Galusa would make.  There were Amoraim, the Gemorah indicates, who were unsettled with eating it, however.  Although Rabbi Yitzchok quoted in Tosfos understands it to be a lentil paste, the Rif describes it as Matzoh that was rolled and cooked.

There are also two fascinating quotes of the Raavan (Psachim 73b).  Firstly, he writes that one should avoid soaked Matzoh in soup on the first night of Pesach – because this takes away the taste of Matzoh itself.  This is actually a proof to the notion that on the rest of Pesach one can eat Gebrokts.  However, he also writes that one should avoid making Matzoh balls because people may come to do it with flour itself and cook it.  The Be’er Heitev OC 460 cites the Knesses HaGedolah to this effect as well.

The Ravya (Psachim 475)also explains that some people do not make kneidlach out of a concern that others may mix this up with doing it with flour and water.  He describes this stringency as a Chumrah of a Baal Nefesh (a worthy individual roughly).

The Maharshdam (responsa OC #26) describes Yupkes, a Matzoh meal based item, and explains that a Baal Nefesh should avoid it.  As of yet, this author has not found a recipe for this item.

How does it fit into common practice?  For the Korech section of the Pesach Seder people that avoid Gebrochts just dip the Marror in the Charoses – not the Matzah (See Mishna Brurah 475:19).  Is it Muktzah for those who do not eat it?  The Chazon Ish (Shabbos 49:15) rules that cooking Kneidlach from Yom Tov to Shabbos may be Muktzah if one’s minhag is that Gebrochts are forbidden.  If one is merely stringent to avoid it than it is permitted.

SOME HOLD IT IS FORBIDDEN TO KEEP GEBROCHTS

There are also opinions that it is forbidden to be stringent.  The Sheilas Yaavetz (Vol. II #65) cites his father the Chacham Tzvi that it is wrong to disallow the Simchas Yom Tov with far-fetched stringencies!

So when did the Chassidim start it?  Reb Mendel of Vitebsk is cited by many of the early Chassidim as attributing it to the Maggid of Mezrich and that, believe it or not, the Baal Shem Tov did eat Kneidlach!

The Chsam Sofer (Responsa OC 138) also used to consume Gebrokts – especially with soup Kneidlach.  Rumor has it that some members of the Chsam Sofer’s family even have the recipe for Kneidlach that his wife used.

In conclusion, Pesach allows us yet another opportunity to connect with our generations past, by strictly adhering to the Minhagim of our parents and grandparents.  Focusing on this aspect of the Minhag will allow us to ever further our growth over this Yom Tov.  A gutten Moed.

May both of their neshamos have an aliyah.