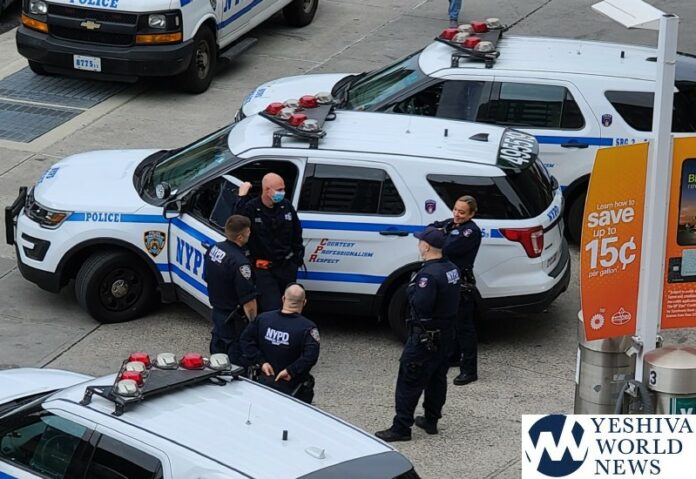 There was chaos in Boro Park on Thursday afternoon, as the NYPD worked to disperse a crowd that gathered for a Levaya.

An NYPD source tells YWN that police were told that a vehicle carrying an Aron (coffin) would be passing by a home on 43 Street near 13th Avenue to recite Tehillim and hold a short Levaya, and took action ahead of time.

Not taking any chances, the top brass of the NYPD arrived – including the Chief of Patrol and at least one other 3 star chief as well as the Chiefs of Brooklyn South.

The NYPD allowed family only to be on the block, but people did not listen to authorities. It prompted the police police to order the vehicle carrying the Aron to leave, prompting a wild scene that was caught on video and immediately went viral.

One person was arrested and released. He was given a “Type C Summons”.

Thursday’s Levaya took place just two days after the Levaya in Williamsburg which has since turned into a national story, and has prompted a massive NYPD crackdown in Williamsburg. Around 100 summonses were issued in Williamsburg on Thursday for not keeping with social distancing and not wearing masks in public.

Meanwhile in Lakewood, a tragic number of SIXTY Levayos were held since the COVID-19 outbreak began. Nearly all were held with 10-15 people in attendance, as the Chevra Kaddisha of Lakewood worked closely with Police and families to ensure all rules were followed.. This included the Levayos of Gedolim and Rabbonim. The Levaya of the Novamimsker Rebbe ZATZAL was held in Boro Park just before Pesach and was attended by a dozen family members. It would of had close to 100K if it would have not been held during COVID-19.