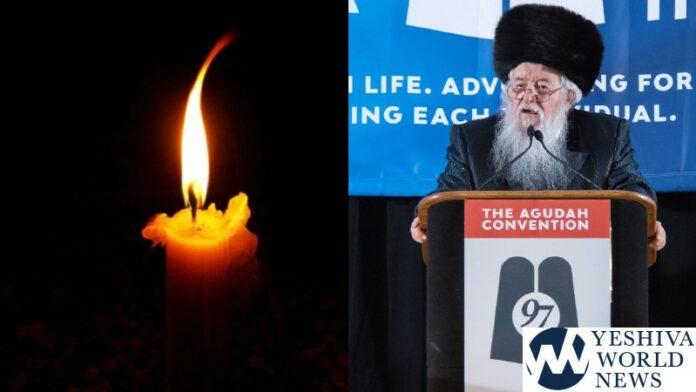 *IMPORTANT* The Agudath Israel & The Novaminsker Yeshiva sent YWN the following important message: We are devastated and brokenhearted to report the petirah of the Novominsker Rebbe Horav Yaakov Perlow, זצוק’ל. The Rebbe was a longstanding member of the Moetzes Gedolei HaTorah of America, and served as Rosh Agudas Yisroel for the past 22 years. The loss to Klal Yisroel, and Agudas Yisroel, is incalculable.

Because of the current situation, the Rebbe’s family is respectfully requesting that nobody other than immediate family participate in the levaya or kevura, which will be’H take place later today. Clearly, as the tremendous baal achrayus that he was, those would have been the Rebbe’s wishes as well. People are encouraged to participate by telephone in the saying of Tehillim. This will take place at 10:00 this morning. The call-in number is 646-558-8656, code 166-981-037#.

The Novominsker Rebbe, Harav Yaakov Perlow, z’tl, was niftar early Tuesday morning at the age of 89, plunging all of Klal Yisrael into deep mourning.

The Rebbe has served as a leader of the American Jewish community, the head of Agudas Yisrael of America and the Nasi of the Moetzes Gedolei HaTorah. The Rebbe was known for his rhetorical skills and was the keynote speaker for many years at Agudas Yisrael and Torah Umesorah gatherings.

The Rebbe, who was ill with the coronavirus, collapsed in his home in Boro Park at 3 a.m. on Tuesday morning. Hatzalah volunteers who arrived at his home spent many long moments trying to resuscitate him but to their sorrow, they were unsuccessful and were forced to declare his death.

Harav Perlow was born in New York to Harav Nochum Mordechai Perlow, z’tl, the previous Novominsker Rebbe and learned as a bochur in Yeshivas Chaim Berlin and was the close talmid of Harav Yitzchak Hutner, zt’l.

Following his father’s death in 1976, Harav Perlow was appointed as the next Novominsker Rebbe and he established a shul as a center for Novominsker chassidim and yeshivas Kol Yehudah in Boro Park.

The Rebbe also authored the sefer Eidas Yaakov on Shas.