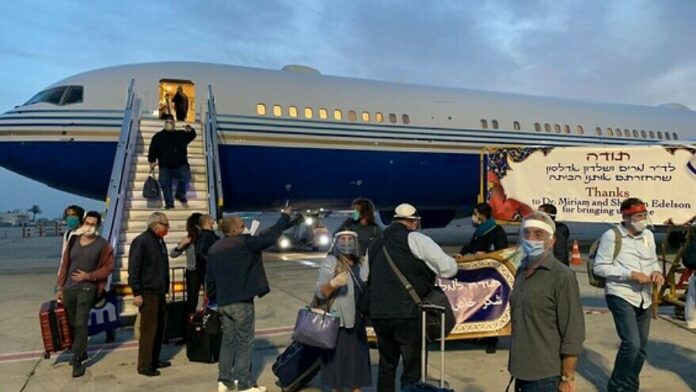 Twenty-six Israelis who have been stuck in Morocco due to coronavirus travel restrictions since March were repatriated to Israel in a complex rescue operation, landing in Israel on Thursday morning.

Sadly, the group originally included 36 Israelis but 10 died while still in Morocco from the coronavirus.

Some of the Israelis were in Morocco on business and others were tourists but all got stuck in Morocco when the government put a total lockdown on the country as soon as the coronavirus pandemic began, halting flights and forbidding travel from city to city.

The Israelis were put up in hotels in Casablanca and Marrakesh at the expense of the Morrocan government but of course, what they really wanted was to fly home, a seemingly impossible prospect not only due to the coronavirus restrictions but also by the fact that Morocco doesn’t maintain diplomatic relations with Israel.

Unfortunately, the Morrocan Jewish community was hit hard by the virus after many of its members attended a large wedding in the coastal city of Agadir with many guests from France and other countries abroad. The guests who attended the wedding then unwittingly spread the virus in the Jewish community in Casablanca during Purim festivities a few days later. The Israelis visiting the country weren’t spared.

The group of Israelis made every effort to leave the country, to no avail, but finally one of them contacted MK Nir Barkat (Likud), who took immediate action. A plan began to form, conceived in secrecy with the help of widespread diplomatic ties.

Barkat recruited the help of Rishon L’Tzion Rav Shlomo Amar, Prime Prime Minister Binyamin Netanyahu‏‏ , and the philanthropists, Sheldon and Dr. Miriam Adelson, who financed the secret operation and donated the use of their private plane.

The National Security Council (NSC) worked on receiving the necessary approvals for the flight, harnessing international diplomatic efforts to bring it about. Eventually, the operation was arranged and the Israelis finally left Morocco, on way to their homeland.

A previous rescue operation was actually arranged in late March with the help of the United Arab Emirates, which had offered to allow the Israelis on their rescue plane for UAE citizens in Morocco. However, the plan was ultimately blocked due to the fact that the Morrocan government, which has strained relations with the UAE, was enraged that the plan was finalized between Israel and the UAE without its input.

“The Moroccan government immediately shut down everything from the time the coronavirus broke out,” Ilan Hatuel, one of the returning Israelis, said. “It was a siege, like war – whoever would leave without approval was arrested on the spot. Traveling from city to city was forbidden, everyone was in their houses and all the flights were canceled. I haven’t seen my family, my three kids in three months – it’s been very difficult.”

Hatuel added that as part of the Israelis’ efforts to find a way to leave Morocco, they turned to MK Barkat. “He saved us,” Hatuel said gratefully. “He got back to me within ten minutes with the news that a private plane will rescue us. We didn’t believe it. He saved us,” he repeated.

“It was a complex process since Morocco doesn’t have diplomatic relations with us,” MK Barkat said. “For a period of time, the [Moroccan] authorities wouldn’t grant the necessary approval for the Israelis to leave and great effort was required to bring them back to Israel. “To the credit of the Adelsons, they allowed us the use of their American plane for the rescue flight. The rescue operation was an extraordinary expression of the responsibility of the state of Israel to its citizens.”

Morocco, a country of 36 million, has recorded 6,512 confirmed cases of the coronavirus and 188 deaths. The tiny Jewish community in Casablanca, comprised of 1,500- 2,000 Jews, lost 1% of its population, suffering at least 15 fatalities.

The fatalities in the Jewish community of Casablanca included the Chabad shaliach in the city, Harav Shalom Edelman, z’tl, and three relatives of Amir Peretz, the head of the Labor party in Israel, one of them a famed philanthropist.