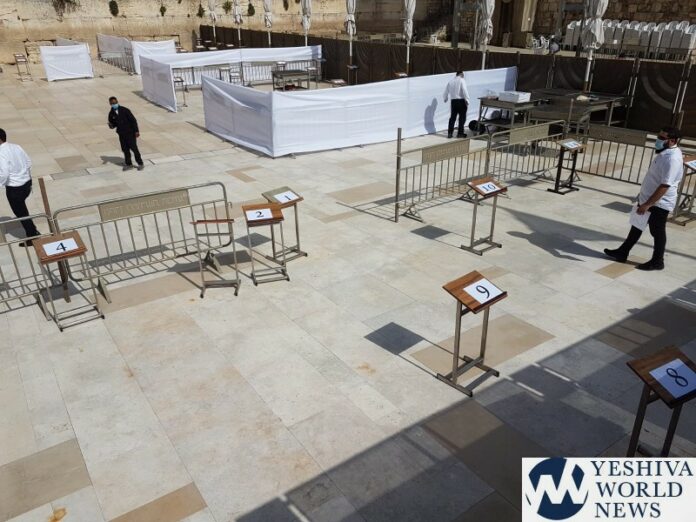 Tens of thousands of mipallelim have visited the Kosel since it re-opened in accordance with Health Ministry regulations.

During regular years, thousands of people show up for tefillas neitz on Shavuos morning and for Kaballas Shabbos, which falls out this year on Motzei Shavuos. Of course, a huge throng of mispallelim won’t be allowed in this year but the question is: who will be allowed in and who won’t?

In order to minimize the agmas nefesh of those who walk to the Kosel on Shavuos only to be turned away, the Western Wall Heritage Foundation has decided that entrance to the Kosel on Shavous morning and Kabalas Shabbos immediately afterward will be allowed only to those with “tefillah tickets” which will be distributed through a lottery.

Entrance to the Kosel before and after the two set tefillos will be allowed according to available space.

Each individual age 11 or older can register for one tefillah only – either tefillas neitz of Shavuos morning or Kaballas Shabbos. Registration is open until Motzei Shabbos, May 23 at midnight.

The lottery will be carried out under the supervision of the foundation’s attorney on Sunday morning, Rosh Chodesh Sivan, and the recipients of the “tefillah tickets” will be published on the fund’s website at 7 p.m.