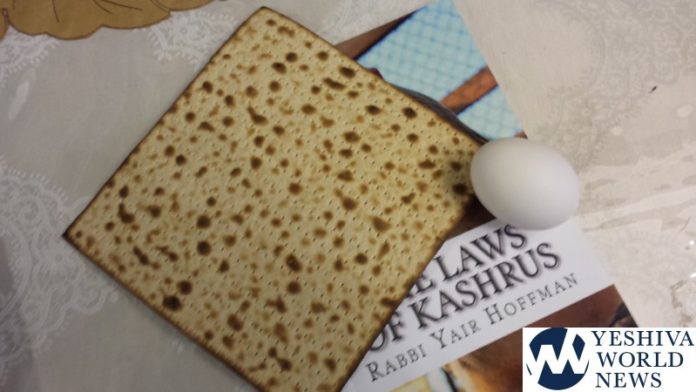 Whenever any day of Yom Tov comes out on a Friday – an Eruv Tavshilin must be made before the Yom Tov begins.

WHAT IS AN ERUV TAVSHILIN?

An Eruv Tavshilim is a Rabbinic device – that involves 3 things:

This Rabbinic device allows one to “continue preparing and cooking” for Shabbos on Yom Tov.

In other words, through the Eruv Tavshilin, one actually begins the Shabbos preparations on the day before Yom Tov.  The Malachos performed on the Yom Tov for Shabbos are considered to be a continuation of these preparations. (Rema O.C. 527:1).

We know, however, that performing Malacha on a Yom Tov for another day other than the Yom Tov itself is, in fact, a Torah prohibition.  If this is the case, how can a Rabbinical enactment allow one to get around a Biblical prohibition?

The answer is that, technically, it was permitted by the Torah to cook on Yom Tov for Shabbos.

Why was it permitted? There is an argument about this very point that is found in the Gemara:

The Rabbis, however, forbade cooking on Yom Tov even when it was done for Shabbos.   Why did they forbid it?

According to whom do we pasken? Ideally, we should be concerned to make sure the food is all cooked from before Shabbos starts. Post fact, we can rely on the opinion of Rav Chisda.

According to both opinions, however, the cooking and baking that is permitted for Shabbos may only be done on Friday when Thursday and Friday are both Yom Tov.  It may not be done on Thursday at all (unless Thursday is Chol HaMoed or chol).

A MARRIED SON OR GUESTS

If guests are expected who are not supported financially by the person performing the Eruv Tavshilim, then in order for the guests to avail themselves of the Eruv Tavshilin, the host must give a portion of it to someone else who will accept IT on the behalf of the guests.  According to the Shulchan Aruch (527:10), the host himself cannot accept it for them, and he requires another person (a spouse is fine).  This accepting on behalf of the guests is called “Zikui.”

Most Poskim are of the opinion that when a married son comes to the home of his parents, the Zikui system should be used rather than mere reliance on the Eruvperformed by the household owner.

To perform the Zikui one merely has to say to another, “please accept this on behalf of those who are coming earlier.”

Ideally, both the baked item and the cooked item should be the size of one Baitza, but, post facto, it is still valid if it was the size of a kezayis.

Ideally, one should also cook the food for the purpose of the Eruv Tavshilin.  Although most people use an egg, the Mishna Brurah (527:8) recommends that one should use meat or fish.  This is on account of the idea of Hidur Mitzvah – beautifying a Mitzvah. Now we understand the use of the steak in the photo.   Why then did the custom of using an egg develop?  The Aruch HaShulchan explains that the hard-boiled egg was used because it spoiled less than fish or meat.

EVERYONE SHOULD MAKE THE ERUV

Even if someone does not plan on cooking or baking for the Yom Tov, he or she should still make an Eruv Tavshilin.  This is in order to allow for the lighting of the Shabbos candles on Yom Tov (See SA 527:19).  However, if one is not cooking and or baking, a berachah would not be recited under such circumstances.

If the person changes his or her mind and does participate in cooking or baking activities, then it is permitted to do so even if the berachah was not recited (See SSK 31 note 83 citing Rav Shlomo Zalman Auerbach).

The Rav of each town also makes an Eruv Tavshilim for people in his town who neglected to make one.  However, one is only permitted to rely on the Rav’s Eruv one time.  There is a question as to whether this means once in a lifetime or one time per year.  One should seek guidance from his own Rav or Posaik on this issue.

We set aside food for the Eruv Tavshilin from before Yom Tov.  These foods should be eaten on Shabbos.  At a minimum one must have one cooked item (and at least a k’zayisof it) and ideally, one baked item as well. The custom is to use an egg and a matzah or a challah. It is proper to use these foods at the Shabbos meal.  As mentioned earlier, some, including the Mishna Brurah, recommend using meat or fish instead of an egg as the cooked item.

Generally, a berachah is recited on the Eruv and the text for the Eruv is recited. It is in Aramaic. If the person performing the Eruv understands Aramaic, then there is no need to recite it in Hebrew or in English. If not, then it should be recited in English. The words mean: With this Eruv, we are permitted to bake, cook, keep warm, kindle fire, prepare and do all that is necessary on the holiday for Shabbos, for ourselves, and for all Jews who live in this city.

EAT IT ON SHABBOS

Ideally, the food should be eaten on Shabbos, for a number of reasons.  One such reason is that an item used for one Mitzvah should be used for another Mitzvah too.

In the z’chus of our rigorously adhering to halacha, and our studying of it, may we all merit a personal geulah in the days ahead.